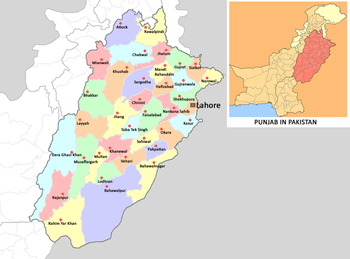 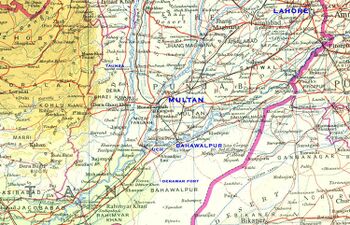 The city was founded at the close of the 15th century and named after Nawab Ghazi Khan Mirrani.

According to 1911 census, the following were the principal Muslim Jat clans in Dera Ghazi Khan District [1]:

The city was founded at the close of the 15th century and named after Nawab Ghazi Khan Mirrani, son of Nawab Haji Khan Mirrani, a Balochi chieftain, who had declared independence from the Langhi Dynasty Sultans of Multan. Together with two other Deras i.e. settlements, Dera Ismail Khan and Dera Fateh Khan, it gave its name to Derajat. Derajat eventually came into the possession of the British after the Sikh War in 1849 and was divided into two districts: Dera Ghazi Khan and Dera Ismail Khan. After the partition of India, many of the city's Hindu residents settled in Derawal Nagar colony of Delhi, India.The district of Rajanpur was later carved out of the Dera Ghazi Khan district. Some of them also settled in various part of India, including Bhiwani, Delhi, Jhansi, Ranchi, Ambala and Haridwar. DG Khan was most famous seat of Krishna (Hindu avatar of God Vishnu) worship , in north west India ,where Lord Krishna was fondly referred as "Thakur Gosain" by devotees. After partition of India, the Lord Krishn Moorat was shifted to a new temple at Railway road , Gurgaon.

Dera Ghazi Khan was founded in 15th century by Amar a Tribal Sardar of Mirani tribe. The old city of Dera Ghazi Khan was situated at the distance of 16 km towards east of the present city. In 1908, the old city was destroyed due to flash floods from heavy rains overflowing the River Indus. The present city was established in 1910. The city is divided into different blocks. The British Raj established colonial system in the continent and declared Dera Ghazi Khan as district in the year 1849. General Courtland was appointed as first Deputy Commissioner of this District. Keeping in view the rapidly increasing population of the area and deteriorating law and order situation district Dera Ghazi Khan was divided in two districts i.e. Dera Ghazi Khan and Rajanpur. Presently there are two revenue sub division of the District. A tribal belt/political area spread along with western side of the District.