According to Bhat records Kulhari migrated from Abu in samvat 755 (= 698 AD). Their Nakh is Johiya.

Dr Pema Ram writes that after the invasion of Alexander in 326 BC, the Jats of Sindh and Punjab migrated to Rajasthan. They built tanks, wells and Bawadis near their habitations. The tribes migrated were: Shivis, Yaudheyas, Malavas, Madras etc. The Shivi tribe which came from Ravi and Beas Rivers founded towns like Sheo, Sojat, Siwana, Shergarh, Shivganj etc. This area was adjoining to Sindh and mainly inhabited by Jats. The descendants of Yaudheyas in Rajasthan are: Kulhari, Kuhad, Mahla, Mahil, Khichar etc. [13]

According to Thakur Deshraj [15]it is a branch of Johiya Jats. Kulhari jats ruled in Marwar area in 11-12th century. Bahipal was their king and Kot-Marot was their capital. There was a fort also at Kot-Marot. Bahipal had a war with the subedar of Hisar in which he lost his kingdom.

Bahipal moved to Kathod (कठोद) and established a new kingdom there. Kathod is about 22 km from Ajmer. The descendants of Bahipal constructed a fort at Koliya. The Raja of Koyalapattan (now called Koliya) arrested the Kulahari Jats. Myth is that their Kuldevi Pada got them released. After that the Kulhari Jats made Didwana as their capital. They established at Didwana statues of Bahipal and the Kuldevi Pada. There is a poem[16] prevalent in the area in Rajasthani language as under:

Ramnath Charan has written in the history of Rajputana that Johiyas had 1500 villages under them and their capital was at Sivanakota (सीवांणकोट). There were differences in two groups of Johiyas. Rathore Viram Dev was given many villages but later Viram Dev conspired against Johiyas so they killed Viram Dev in a war in 'Bade Ran' (Marwar). In samvat 1464 Viram Dev's son expelled them from Marwar.[17] [18]

Another theory by Bards tells us that there was a king in Haryana who had three sons. One was Khichar , another was Mahla & third one was Kulhari. These sons came to Rajasthan. Mahlas settled in a place called Bhalaria in Jhunjhunu. From there they migrated to other places in Rajathan. As a matter of fact Mahla, Kulhari & Khichars are considered brothers & don’t marry in their gotras.

We get following information from the history of Nagil clan: According to the records with people of this clan in Haryana, Raja Sajraj Veer Singh Nagil was the most famous ruler of this clan (880 to 935 AD). He ruled Ranthambore for 31 years. He is still remembered by his descendants and local historians for his administrative and war skills. His descendants are found in Sanjerwas, Jaitpur of Bhiwani district and Harita (हरिता) of Hisar district, very close to Rajasthan Border in Haryana. The great Nagill king headed and maintained a small army of 20000 thousand die hard Jat warriors including the cavalry of 10000 soldiers to protect his kingdom from the powerful Rajput kings of Rajasthan. Raja Sajraj Veer Singh Nagil had full support of Gora clan of Jat that ruled Ranthambore for a long time. Both Nagil and gora are associated with the rulers of Marwar. Nagill clan is brotherly branch of Kulharia rulers of Marwar. Nagil, Gora and Kulharia they all belong to the Nagavansh association.

It is believed that one foster son of Kularia ruler, whose grandfather was Jat ruler of Naga clan and ruled the north India for a long time, was playing in garden,when he spotted a garish, black cobra snake laying under a spout. The lethal snake attracted and drew the attention of little boy. He started playing with the patience of king cobra. The cobra ignored the little prince but the prince kept pursuing the noble work of provoking the king cobra snake. When the furious Naga was about to retaliate the little prince, the boy scared and shouted for the help. His meek voice for help was heard by his mother who at once rushed to help her little one. She found her kid son shivering in front of a black king cobra. She realized the situation and tendered her apology to the snake king on the behalf of her little son and asked the NAG to spare her son as he was not able to understand the dignity of a king cobra. She also assured the king snake that her son will carry the original title Naga if his life is spared by god of the snakes. She also reminded the king snake that Kulahria family is a Nagavanshi and worships the Shiva and Naga king. She also revealed that the little boy belongs to the Naga clan of Jat and deserves the blessing of king cobra. The king Naga forgave the little prince and gave its blessing to the kid by touching his right hand affectionately and left the room without any fuss.The mother kept her promise and the surname of the boy was reverted back since then the descendants of the prince are known as Nagill. The word Nagil had been derived from the association of Nagavansh. For a matter of fact, Nagill, Kohad and Kulaharia never marry in their clans.

Bhattis are a Jat as well as a Rajput clan, and fortunately for history, they have left their annals in Jaisalmer (Rajasthan) where they ruled for centuries. These records of theirs, have been included by Col. James Tod in his well known Annals and Antiquities of Rajasthan, in three volumes. We are quoting from this work of James Tod. [19]

The Bhattis of Jaisalmer trace their origin to the same Zabulistan/Gazni area of Afghanistan, where the Jat clans were ruling. Their annals, written by Brahman Sukhdharma of Mathura give the usual Yadu line of Krishna of Dwarika up to Naba, and then the Brahman writer says, "Thus far from Bhagvata, and I continue the history of the Bhattis.... " Here is clear admission that the genealogy of the Yadus has been given from Bhagvata Purana and the Bhattis who sought to be connected with the Yadus, are connected with 'Naba'.

Vajra had two sons, Naba and Khira. When the Yadus were exterminated in the conflict at Dwarica, and Hari had gone to heaven, Vajra was on his way from Mathura to see his father, but had only marched twenty coss (forty miles), when he received intelligence of that event, which had swept away his kindred. He died upon the spot, when Naba was elected king and returned to Mathura, but Khira pursued his journey to Dwarica. [20]

Naba had issue Prithibahu. Khira had two sons, Jhareja and Yadubhan. Yadubhan went to Behera and became a great prince, had a numerous progeny, and the place of their abode was henceforth styled Jadu Ka Dang. [21]

Raja Gaj founded Ghazni. On Sunday, the 3d of Bysāk, the spring season (Vasant), the Rohini Nikhitra, and Samvat Dharmaraja (Yudhishthira) 3008 (=93 BC), Raja Gaj seated on the throne of Ghazni. Raja Gaj invaded Kashmir ; and married the daughter of its prince, by whom he had a son, called Salivahan. When this child had attained the age of twelve, tidings of another invasion came from Khorasan. Raja Gaj sent his family and kin, and on pretence of a pilgrimage to Jwalamukhi, with the prince Salivahan, to Punjab, where he fixed on a spot with abundance of water, and having collected his clansmen around him, he laid the foundation of a city which he named after himself, Salivahanpura (Salpura), on Sunday, the 8th of the month of Bhadoon of S. 72 (=16 AD). The surrounding Bhomias attended, and acknowledged his supremacy. Salivahan conquered the whole region of the Punjab.[23]

Raja Bhatti succeeded his father Raja Baland. He conquered fourteen princes, and added their fortunes to his own. Among his effects, he reckoned twenty-four thousand mules laden with treasure ; sixty-thousand horse, and innumerable foot. As soon as he mounted the gadi, he assembled all his forces at Lahore preparatory to the teeka-dour destined against Beerbhan Bhagel, lord of Kanakpur. Beerbhan fell in the battle which ensued, at the head of forty thousand men. With Bhatti, the patronymic was changed, and the tribe thenceforth was distinguished by his name. [26]

Kullar, third son of Raja Baland, had eight sons, whose descendants are designated Kullar[28] Their names were, Seodas, Ramdas, Asso, Kistna, Samoh, Gango, Jesso, Bhago ; almost all of whom became Moosulmauns. They are a numerous race, inhabiting the mountainous countries west of the river, and notorious robbers.[29]

Jinj, the fourth son, had seven sons ; Champo, Gokul, Mehraj, Hansa, Bhadon, Rasso, Jaggo, all whose issue bore the name of Jinj and in like manner did the other sons become the patriarchs of tribes. Doubtless the junction of Jinj with that of Johya, another numerous tribe, formed the Jenjuheh of Babar ; the Johyas of the Bhatti annals, now known only by name, but whose history forms a volume. The sons of Jinj have left numerous traces — Jenjian on the Garah ; Jinjinialli in the desert, &c. [30] Jinja and Jinjwaria are Jat clans originated from Jinj.

Mangal Rao succeeded, but his fortune was not equal to that of his fathers. Dhoondi, king of Ghazni, with a mighty force, invaded Lahore; nor did Mangul Rao oppose him, but with his eldest son fled into the wilds on the hanks of the river. The foe then invested Salivahanpur, where resided the family of the Raja.[31]

Masur Rao escaped and fled to the Lakhi Jungle. There being only a cultivating peasantry in this tract, he overcame them, and became master of the country. [32]

Masur Rao had two sons, Abhe Rao and Saran Rao. The elder, Abhe Rao, brought the whole Lakhi Jungle under his control, and his issue, which multiplied, became famous as the Abhoria Bhattis. [33]

Saran Rao quarreled with and separated from his brother, and his issue descended to the rank of cultivators, and are well known as the Saran Jats. [34]

The younger boys, Phool and Kewala, who were passed off as a barber (nai), and a potter (kumhar), fell into that class.[38] 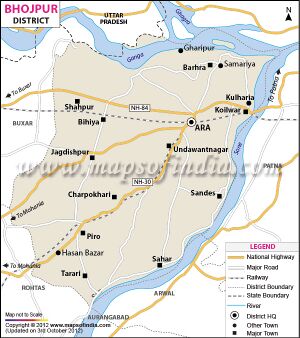 It is interesting to not that bards have shown association of Kulharia and Mund clans. This gets evidence in the form of a town called Kulharia, a village in Bhojpur district in Bihar, India. It is located near the confluence of the Ganges and Sone Rivers, some 24 miles from Danapur and 36 miles from Patna.

Kulrian is village in Budhlada tahsil in Mansa district in Punjab.