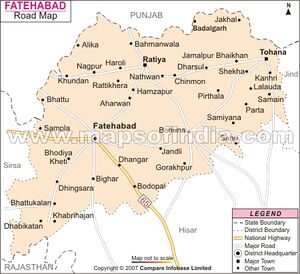 Fatehabad (फतेहाबाद) is a city and headquarters of the district with the same name in Haryana.

Indo-European language-speaking people first settled on the banks of the Sarasvati and Drsadvati Rivers rivers then expanded to cover a wider area of Hisar and Fatehabad.[1] The area was probably included in the kingdom of the Pandavas and their successors.

Pāṇini mentions a number of towns in the region including Aishukari, Taushayana and Rori, which have been identified with Hisar, Tohana and Rohri respectively.

After the fall of the Mauryas and Shungas, the Agras along with the Yaudheyas — the republican tribes of the region — asserted their independence. The Agras settled in the region covering Barwala and Agroha, the capital headquarters, from where they issued coins. As attested by the discovery of coin-moulds and terracottas, the region was a part of the Kushan empire. According to Anant Sadashiv Altekar, the Yaudheyas made a second bid for independence towards the end of the 2nd century AD when they succeeded in freeing their homeland and ousted the Kushans. This finds support from seals discovered at the Agroha Mound.

The early 11th century saw the Ghaznavid make inroads in this area. Sultan Masud led expeditions towards Agroha. The Chauhans seem to have taken special measures for protecting the area against Mongol incursions. The area of Agroha passed under Ghurid rule after the defeat of Prithviraj Chauhan III in the Second Battle of Tarain (1192).

After the Battle of Tarain, Sultan Shihab-ud-din Muhammad Ghuri placed one of his generals in the Indian campaigns. But it appears that any meaningful control could not be established. Seizing the opportunity, Jatus, a branch of Tomar/Tanwar, widely extended their power in Fatehabad area including Agroha.

Firozshah Tughlak (1351–88) shot these areas into prominence. The ruler came to have somewhat unusual fancy for the tract (Hisar). He established new towns of Fatehabad and Hissar and rebuilt two canals; one taking off from Ghaggar at Phulad and following the course of Joiya up to the town of Fatehabad. After the death of Firuz (1388), chaos and confusion spread all round. The situation deteriorated still further when Timur invaded in 1398. During his invasion, Timur invaded Fatehabad which was captured without any opposition from the inhabitants. Lastly, the invader reached Tohana but he could not set-up his permanent rule over the area. He soon left for Samana after looting these areas. The areas of Fatehabad came under the control of Mughals-Babar and Humayun.

There is a small mosque known as Humanyun mosque at Fatehabad.[2] The legend assigns the association of the mosque to the Mughal Emperor Humayun who in his flight after his defeat at the hands of Sher Shah Suri happened to pass through Fatehabad. Fatehabad was one of important Mahals during Akbar's time. By 1760, the areas became the scene of a sort of triangular duel between the sturdy Sikhs of north-east, marauding Bhattis of north-west and the Muslim chiefs of the south. None of them could, however, hold the region permanently except for the Bhattis who became the masters of Fatehabad pargana. In 1774, Maharaja Amar Singh of Patiala along with his famous minister Dewan Nanumal laid siege to the stronghold of Bighar near Fatehabad which fell shortly afterwards.

The Raja then took Fatehabad and Sirsa and invaded Rania held by Bhattis. Tohana also was seized by the Chief of Patiala. But after a treaty of Jind in 1781, Fatehabad and Sirsa were made over to the Bhattis and remaining territories were allowed to be retained by the Sikhs. By 1798, Agroha and Tohana were important parganas under the control of George Thomas. When George Thomas was driven out from here by the Sikh-Maratha Confederacy, a French Officer Lt. Bourquian controlled these areas on behalf of Marathas. He is said to have rebuilt the towns of Tohana and Hissar. Later these areas were placed under the charge of Illias Beg, a Mughal noble of Hansi.

In November 1884, the Sirsa district was abolished and Sirsa tahsil after the distribution of villages was formed. In 1889, 15 villages forming a detached block known as Budhlada were transferred form Kaithal tahsil to Fatehabad tahsil. The Barwala tahsil containing 139 villages was abolished with effect from 1 January 1891 and its area was distributed between 3 contiguous tahsils; 13 villages going to Hansi, 24 to Hissar and 102 to Fatehabad. At the same time 13 villages were transferred from Hissar tahsil to Bhiwani tahsil and a sub-tahsil was established at Tohana in Fatehabad tahsil. In 1923, the Tohana sub-tahsil was transferred from Fatehabad to Hissar tahsil. In 1972, Tohana sub-tahsil was upgraded to tahsil. Two sub-tahsils, one at Ratia of tahsil of Fatehabad and other at Adampur of Hissar tahsil were created in 1979. By the end of 1978, the Hissar district comprised 486 villages, divided between tahsils of Fatehabad (166); Hissar (115), Hansi (119) and Tohana (86). Fatehabad came into existence as a full-fledged district with effect from 15 July 1997, now having three sub-divisions, three tahsils and three sub-tahsils.