Note - Please click → Shyampura for details of similarly named villages at other places. 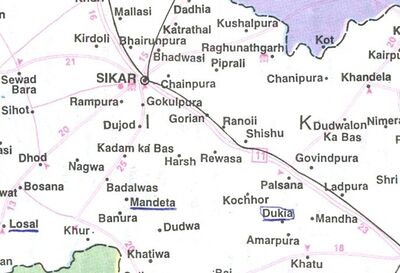 It is near Piprali at a distance of few kms in the east of Sikar town. Another Shyampura is in west of Sikar with population of Tetarwal gotra.

As per records of the bards of Burdak the village was founded by Burdak Jats.[1]
Shyampura East (श्यामपुरा) village is surrounded by Sikar tahsil in Sikar district of Rajasthan. It is near Piprali at a distance of 6 kms in the east of Sikar town. This Village is belongs to Danta-Ramgarh Taluka(Tahsil).


GUWAD WALA BALAJI
It was known as Kuwa ka Balaji. It was founded by Shree Baluram ji and Nandaram ji Boran in 1994. It was reconstructed in 1988 in current view.
Nandiswar Statue
Nandiswar platform was founded in 2005 and statue was made in 2014.
Dharan ka balaji
First of all , first well of village was made at Dharan kothi about 245 years ago, A temple was founded by Borans of Villages with this well and now this is know as Dharan ka Balaji and it also known for many miracles.

Light / Electricity
Very firstly Shree Narayan ram boran had set up a electricity powered pump set in this village in 1970.
SOBHANA JOHADA
In the Monarchy system of India, The cows from Jaipur kingdom used to come to Rewasa Pasture to graze. But Purohit Brahamn made objection of this , to resolve this issue Shree Shobharam ji Maharaj made a JOHANDA 1.5 far from the village where those cows can come & graze here . That places is called Shobhana Johada.

Back to : Jat Villages