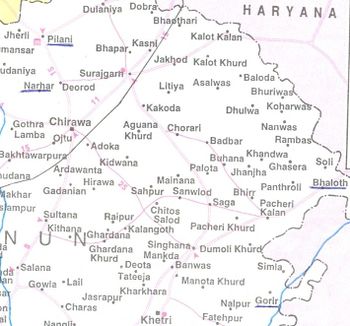 Location of Ardawata in Jhunjhunu district

It is located in east direction of Jhunjhunu city at a distance of 30 kms and 6 kms in south of Chirawa town on Chirawa-Udaipurwati road. It was founded about 1000 years back. The population of the village is about 7000. Pincode: 333027.

The village is divided into two parts 'aguna bas' and 'athuna bas'. There live about 650 families out of them 300 families are of the Jats.

The village has large number of people in the Indian Army. Every family has a retired fauji pensioner. The village is also politically very active.

In 1952, as a social worker Shis Ram Ola started girls education in this remote and rural area in Rajasthan with three girls. He named the school after Indira Gandhi "Indira Gandhi Balika Niketan Ardawata". His attempt was undoubtedly a result oriented one as it brought Jhunjhunu district, during 1952-96, to third place in literacy.

This Institute has been upgraded to College level and education upto B.Sc. B A and B.Ed degree courses are run in it.