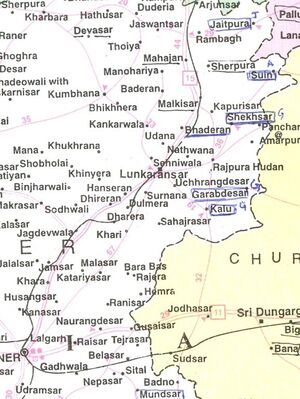 Location of Shekhsar in Bikaner district

Shekhsar town is named after the Islamite saint, Shekh Fareed of Pakputtun, who had a durgah here. He was greatly esteemed by the Jats, before the bona dea assumed the shape of a Jatni, to whom, under the title of Karani Mata, ' a ray of the mother,' all bend the head.[1]

It is situated on the north-east border of the district adjoining Churu and Hanumangarh district boundaries. The village has a population of 5820 out of them are SC 1182 and ST 4.[2]

The Sinwar Jats of this area were influenced by Hazrat Baba Fareed Shaker Gunj, whose shrine is in Ajudhan (Pakpattan, District in Punjab, Pakistan). The earlier name of this village was Sukhchainpura and it was named Shekhsar after Baba Shekh Fareed.

It was the capital of ancient republic of Godara Jats prior to its annexation by Rathores. The Godara chief was Pandu Godara and they had 700 villages under them. Their capital was at Shekhsar. The districts included under Godara rulers were Shekhsar, Pundrasar, Gusainsar Bada, Gharsisar, Garibdesar, Rungaysar, and Kalu. The people of Godara clan were known as great and ambitious warriors.

Thakur Deshraj[5] and James Todd[6] have mentioned the history of this republic. According to them, In samvat 1515 (1459 AD) Joda transferred the seat of government from Mundore to Jodhpur. His son Bika, under the guidance of his uncle Kandul, led three hundred of the sons of Seoji to enlarge the boundaries of Rathore dominion amidst the sands of Maroo. Bika was stimulated to the attempt by the success of his brother Bida, who had recently subjugated the territory inhabited by the Mohils for ages. Bika, with his band of three hundred, fell upon the Sankhlas of Jangladesh whom they massacred.

Bika now approximated to the settlements of the Jats, who had for ages been established in these arid abodes; and as the lands they held formed a considerable portion of the state of Bikaner.

The Jats and Johiyas of these regions, who extended overall the northern desert even to the Garah, led a pastoral life, their wealth consisting in their cattle, which they reared in great numbers, disposing of the superfluity, and of the ghee and wool, through the medium of Sarasvat Brahmins (who, in these regions, devote themselves to traffic), receiving in return grain and other conveniences or necessaries of life.

Although the success of his brother Bida over the Mohils in some degree paved the way, his bloodless conquest could never have happened but for the opresence of a vice which has dissolved all the republics of the world. The jealousy of the Johiyas and Godaras, the two most powerful of the six Jat cantons, was the immediate motive to the propitiation of the ' son of Joda ' ; besides which, the communities found the band of Bida, which had extirpated the ancient Mohils when living with them in amity, most troublesome neighbours. Further, they were desirous to place between them and the Bhattis of Jaisalmer, a more powerful barrier ; and last, not least, they dreaded the hot valour and "thirst for land" which characterised Bika's retainers, now contiguous to them at Jangladesh. For these weighty reasons, at a meeting of the "elders" of the Godaras, it was resolved to conciliate the Rathore.

The "elder" of Runiya was next in rank and estimation to Pandu Godara, in communities where equality was as absolute as the proprietary right to the lands which each individually held: that of pasture be common.

The elders of Shekhsar and Roneah were deputed to enter into terms with the Rajput chief, and to invest him with supremacy over the community, on the following conditions :-

On the fulfillment of these conditions, they relinquished to Bika and his descendants the supreme power over the Godaras; assigning to him, in perpetuity, the power to levy "dhooa", or a "hearth tax" of one rupee on each house in the canton, and a land tax of two rupees on each hundred beeghas of cultivated land within their limits.

Apprehensive, however, that Bika or his descendants might encroach upon their rights, they asked what security he could offer against such a contingency ? The Rajput chief replied that, in order to dissipate their fears on this head, as well as to perpetuate the remembrance of the supremacy thus voluntarily conferred, he would solemnly bind himself and his successors to receive the tika of inauguration from the hands of the descendants of the elders of Shekhsar and Roneah, and that the gadi (the chair) should be deemed vacant until such rite was administered.

To this day, the descendant of Pandu Godara applies the unguent of royalty to the forehead of the successors of Bika ; on which occasion, the prince places "the fine of relief", consisting of twenty-five pieces of gold, in the hand of the Godara Jat.

Moreover, the spot which he selected for his capital, was the birthright of a Nehra Jat who would only concede it for this purpose on the condition that his name should be linked in perpetuity with its surrender. Nehra was the name of the proprietor, which Bika added to his own, thus composing that of the future capital, Bikaner = Bika + Nera.

Godara are well educated including doctors, judge, engineers and teachers. Some Kajla's are also doing well in field of education.