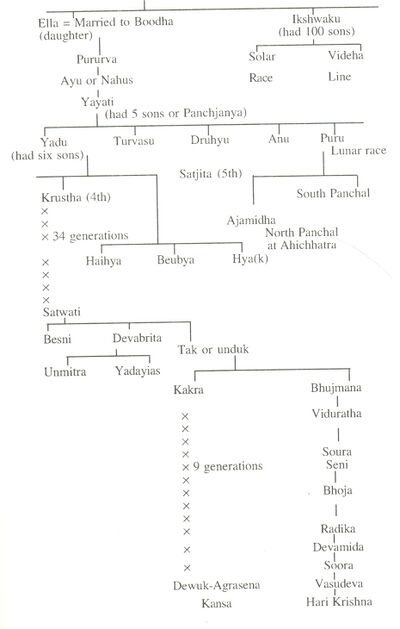 Shura (शूर) was a Chandravanshi King descendant of Maharaja Viduratha (विदूरथ). There is another Shura who is father of Vasudeva and grandfather of Krishna.

Hukum Singh Panwar[2] has given the ancestry of Bharatpur rulers starting from 1. Yadu. Shura is at S.No. 37 and Krishna at S.No. 43 as under[3]:

Rajatarangini[4] tells us [p.107]: The brother and brother's son of Avantivarmma rose against him several times, but he defeated them in battle, and having restored peace in his kingdom, he divided bis wealth among his friends and servants, out of affection towards them. Out of his affection too for his step-brother Suravarmma he raised him to the dignity of heir-apparent. This Suravarmma bestowed the villages of Khadhuya and Hastikarna to Brahmanas, and set up images of two gods named" Suravarmmasvami and Gokula. The holy king also set up a Matha, the pride of the world, and bestowed the village of Panchahasta on Brahmanas. Another brother of the king named Samara, set up images of Rama and his brothers as well as one of Samarasvami. The two younger brothers of Sura named Dhira and Vitrapa who were accountants, built up two temples named after them. These two brothers went up bodily to Kailasa, the heaven of Shiva ! Sura had a door-keeper

[p.108]: named Mahodaya who set up a god named Mahodaya soami. It was in this temple that Rāmaja whose school of grammar was then celebrated, was employed as expositor. Prabhakaravarmma, the king's minister, built a temple of Vishnu named Prabhakarasvami. He had a tame shuka bird who accompanied other Shukas and brought many pearls ; whereupon the minister built the celebrated Shukavali.

The minister Shura patronized learning and encouraged the learned, and many learned men were brought to the court in royal carriages drawn by pair, and were well received. The following authors flourished in this reign :Muktākann, Shivasvami, A'nandavardhana and Ratnākara. Kritamandāra the bard of the minister Shura used to repeat the following sloka in the court as a hint to his master. " This is the time to do good, while fortune lasts, for fortune is naturally fleeting, and danger is always at hand, and when danger comes, there will be no more opportunity to do good." Shura raised many edifices, and among others one for Hara- Parvati, a figure half male and half female, at the shrine Sureshvari. This temple was very strongly built. And having set up the god Shureshvara, he built the temple Shura-matha, as high as his own mansion, for the dwelling of devotees. He built a beautiful town named Shurapura and brought there the celebrated drum which was is Kramavartia. Ratnavardhnna, his son, set up an image

The king who had no vanity in him, allowed his brothers and Shura and Sura's sons to bear the royal arms. The king was from his childhood a Vishnuvite, but out of regard for Shura he inclined towards Shivaism. He built the town of Avantipura at Vishvoukasara the shrine ,where the souls of the dead receive salvation. There, before he became king, he had set up the image of the god Avantisvami, and after becoming king he set up that of Avantishvara. And out of his silver bathing vessel he made three seats for three gods, Tripureshvara, Bhutesha, and Vijayesha.

Rajatarangini[5] tells thatSussala had received many services from Lothana ; but Shura, the king of many lands, to whom Sussala had given his daughter Padmalekha in marriage, came to the help of the king (of Kashmira,] and Shura's soldiers consequently attacked the soldiers of the enemy. When they had besieged the country, Lothana's heart wavered through fear, and he thought of submitting to the king, and to the punishment he would award. (p.161-162)

The Mahabharata Tribe - Sura (शूर) fought in the Kuru army among the tribes of the northwest (VI.20.30); considered identical with the Sur tribe of Afghanistan. (II.29.5), (II.31.13). Mahabharata Bhisma Parva mentions about these people in shloka 38 as under:

Shoor people were the rulers of Bateshwar (बटेश्वर). They were so powerful that the entire country was named Shaursain (शौरसैन) after them. Shaursaini (शौरसैनी) people were at Bharatpur, whose one branch was known as Sewar/Sevar (सेवर). [6]

Mahabharata mentions a Suryasura and obviously not for the sun (Surya) but for the Sura people [7] Darada (the Darar clan people) a king of Bahlika was born from Surya. [8] The Sura Kings came for Yudhisthira’s sacrifice. [9]

Megasthenes has mentioned them as Suari in his book Indica. ( See - Jat clans as described by Megasthenes)