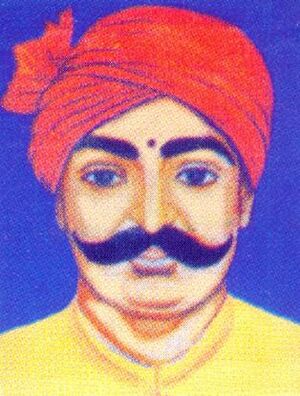 Ram Sarup Joon[3] writes that ...Faujdar Raja Ram who belonged to Village Sinsini (Bharatpur) came to the forefront as a Jat leader 15 years after the death of Gokal Singh. He made an alliance with another Jat leader Ram Chehra of Sogarias.

With mutual co-operation they recruited and organised a well disciplined army trained in modern warfare and equipped with modern weapons. A fort was constructed by him at a place near Sinsini. On completion of these basic requirements, Raja Ram started raiding the royal treasuries and caravans. He organised a net work of out posts in such a manner that no royal convoy could pass unchallenged. Once he laid siege of Agra with the intention of destroying the Mausoleum of Akbar. He did not, however, achieve his aim because of the valiant action of Abdul Fazal, Commander of Moghul forces in Sikandra at Agra. Once the Jats attacked the camp of Khan Bahadur near Dholpur, killed his son-in-law and 80 soldiers and carried away a large number of horses, carts and muslim women. Aurangzeb was very much perturbed with these activities but he was fully occupied with Marathas in Deccan at that time. In 1686 he sent an army under Zafar Jung Kokaltash to crush the Jats which was badly beaten back Again in 1687 more troops were sent for a similar campaign under Bidar Bakht, the eldest son of Prince Azam, assisted by Khan Jehan. But this force also failed to achieve results.

Raja Ram attacked the camp of Mir Ibrahim alias Mahabat Khan and killed or wounded 190 soldiers. Thereafter he advanced towards the Punjab and lay encamped on the banks of the River Jamuna. He attacked the mausoleum of Akbar, plundered it and defeated Shaista Khan, the Governor of Agra. Bidar Kakht retreated without fighting. Raja Ram was killed in the battle while helping Chauhan rulers against Sekhawats, who had the support of the Moghuls. He had infused a new spirit in the Jats within two years of his leadership which proved valuable for further struggles against, the rule of the proud and fanatic Aurangzeb. Faujdar Raja Ram can easily be compared with Shiva Ji. While Shivaji was helped by the mountainous features in the area of operation, Raja Ram fought the Moghuls in the plains which favoured larger armies.

Bhajja Singh along with his brother Brij Raj of Sinsini and their relatives prepared a small army of Sinsinwar and Kuntal gotra jats. Raja Ram organized Jat groups of different clans and united them under him.

Sogaria was a powerful Janpad of Bharatpur and its chieftain was Ramki Chahar. Sogaria Jats already had a castle at Sogar (4 miles south-east of Bharatpur). He took Ramki Chahar with him. He fraternized with the Jats of Sidgiri region (Bayana, Rupbasaia). He also befriended the Jats of Ranthambhor against the Amber ruler Ram Singh. On the basis of the contemporary dispatches it can unmistakably be deduced that Raja Ram proved a great rallying point and a great number of the Jats were united under his leadership. This way he completed an important work of bringing together the scattered and unorganized Jat power.

He planned to construct kuchha mud forts all around in the Jat-belt. He trained the young farmers as skilled soldiers. He educated the rebels to strictly obey the instructions of their chief.

Next, he began to organize his followers from the military point of view. He gave those military training and equipped them with firearms. He trained them in horse riding and weapons. He collected guns and other weapons.

He organized them into regiments placed under different captains. Simultaneously, he impressed upon the self-willed and freedom loving Jats, the necessity of remaining disciplined and obeying their captains. Thus he imparted to them the semblance of a regular army.

Raja Ram gave similar attention to the strengthening of his defenses, for he must have seen how Tilpat was easily stormed for lack of proper defense and thus sealing the fate of the Jat rising under Gokula. Raja Ram, therefore, built his forts in dense deep Jungles and surrounded them with mud ramparts.

The forest-infested environs and the mud walls rendered them stronger than was the chief stronghold of Gokula. These forts served as bases for operations and refuge as also places for dumping the booty. As is apparent from his tactics, Raja Ram stuck to the traditional mode of the Jat warfare, popularly known as “Dhar” (guerrilla) system. All through he avoided positional warfare with the Mughals and confined himself to sudden and intrepid attacks. This ensured him maximum benefit with minimum loss. These changes proved beneficial and gradually contributed to the success of the Jat rebellion.

Having thus prepared himself, Raja Ram began to organize raids in the countryside of the Suba of Agra. The Jats hovered on the roads and plundered the caravans and the travelers. The Subadar of Agra, Safi Khan, was virtually besieged in the Agra fort. Along with the other rebels the Narukas, the Panwars, the Gujars and the Mevs - they practically closed the roads for normal traffic between Dholpur and Delhi, and Agra and Ajmer via Hindaun and Bayana. How deep was the consternation created by the insurgents would be clear by one instance that in an important place like Mathura no place except Jama Mosque was deemed safe. Raja Ram also tried to ransack Akbar’s mausoleum at Sikandara. But his attempt was foiled by the local faujdar, Mir Abul Fazl. He confronted the rebels at a place, 10 miles from Sikandara. The faujdar succeeded in repulsing them, though in the process he was seriously wounded and a number of his troops also perished. Raja Ram also suffered heavy casualties. Aurangzeb rewarded the faujdar with the title of Iltitifat Khan, increasing his Mansab by 200 sawars. Unsuccessful at Sikandara Raja Ram then fell upon Shikarpur and grabbed rich booty from the place. There from, he retired towards Ratanpur.

Worries of the Emperor Aurangzeb

Raja Ram’s mischief and disturbances went increasing. This worried the Emperor. On 3rd May 1686 he appointed Khan-i-Jahan Bahadur Zafarjang Kokaltash in order to punish the rebels. Despite his strenuous efforts, however, Khan-i-Jahan failed to capture any of the Jat strongholds or to punish the people. Therefore, he ordered his son, Muhammad Azam to proceed against the Jats. But he had only reached Burhanpur (July, 1687) when more pressing needs of Golconda compelled Aurangzeb to recall the Prince. Thereafter Bidar Bakht was sent (December, 1687) to assume supreme command in the Jat war, while Khan-i-Jahan was to act as his deputy.

Meanwhile, Raja Ram showed greater audacity. He fell upon the Mughal commander Aghar Khan. The Khan with his retinue was enroute from Kabul to Bijapur when the Jats attacked him near Dholpur and fled away capturing many bullocks, carts, horses and women. The general gave them a hot chase but was killed in the ensuing skirmish along with his son-in-law and 80 other men. Two hundred Jats were killed in the action. The psychological gain from this audacious act was much more than the material one. Their success in killing and routing the reputed suppressor of the frontier Afghans must have whetted the audacity of the Jats. They carried their depredations further.

Early in 1688, Raja Ram attacked Mahabat Khan, who on his way to Lahore was encamped near Sikandara. A fierce fight ensued in which Raja Ram was finally overpowered and driven back after losing 400 men. The casualties on the other side included 150 dead and 40 wounded.

After a short while, Raja Ram reappeared at Sikandara and taking advantage of the delay in coming of Shaista Khan, the governor-designate of Agra, he attacked and plundered Akbar’s mausoleum. The Jat leader carried away the precious articles of gold and silver, carpets, lamps etc. and destroyed what he could not carry.

According to Manucci, the Jats dragged out the bones of Akbar, threw them angrily into fire and burnt them. Thus avenged Gokula. Muhammad Baqa (the Naib of Khan-i-Jahan), who was then at Agra, did nothing to frustrate the rebels. As a punishment, therefore, 500 and that of Khan-i-Jahan reduced his mansab by 1000 sawars. The Jats also ransacked the villages, set aside for the support of Taj Mahal. Some Jats ravaged the environs of Khurja, while others captured the local Mughal officers at Palwal.

One noteworthy fact is that the local Mughal officials and soldiers in general, winked at the disobedience of the Jats and even secretly entered into collusion with them to share the booty grabbed by them. It is also to be noted that Muhammad Baqa, the deputy of Khan-i-Jahan at Agra, had remained inactive while Raja Ram robbed Akbar’s tomb. This exasperated Aurangzeb and he reduced the deputy’s Mansab by 500 and that of Khan-i- Jahan by 1,000 sowars. Meanwhile, the daring and audacity of the Jats alarmed Aurangzeb and he ordered Raja Ram Singh (who was at Kabul) to chastise Raja Ram. But due to his sudden death the Raja could not resume his charge.

The Battle of Bijal

Raja Ram, on the other hand, persisted with his refractory activities. His strength and resources now began to attract the attention of others.

During these days the existing feud between the Chauhans and the Shekhawat Rajputs over disputed land in Bagtharia (22 miles north-east of Alwar) and some other parganas had erupted into an open war. The Chauhans appealed to Raja Ram for help, while the Shekhawats implored the help of Murtaza Khan, the Mughal faujdar of Mewat.

Bilar Bakht, Rao Raja Anirudh Singh of Bundi and Maharao Kishor Singh Hada joined the faujdar and the Shekhawats. A severe battle was fought near Bijal. Opposite Raja Ram was the Hada Chief upon whom he inflicted a crushing defeat.

Anirudh Singh himself could not stand before the Jat onset. He became nervous and fled along with his troops. When the battle was in its full fury the gallant Raja Ram led a fierce charge against the centre, consisting of the Mughals. Meanwhile, a Mughal musketeer, who had hidden himself in a tree, fired Raja Ram at his chest. He fell down from his horse and died immediately on Wednesday 4th July 1688. His fall signaled the defeat of the Chauhans head was severed from the body and later on presented to Aurangzeb in the Deccan (5th September, 1688, 19th Zi-Qada, 1099 A.H.). Ramki Chahar was captured alive in the battle and was publicly executed at Agra.

Thus perished Raja Ram. As a leader of men and as a soldier, organizer and tactician, he was certainly more capable than any other preceding Jat chief. His influence upon the contemporary history has not been properly assessed so far. 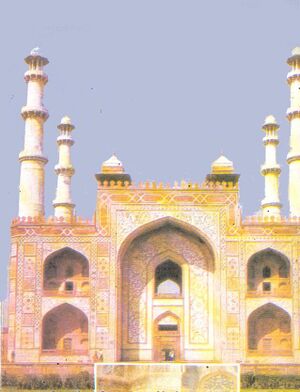 Akbar’s mausoleum at Sikandara was ransacked by Raja Ram