The Taj Mahal (ताज महल) is an ivory-white marble mausoleum on the south bank of the Yamuna river in Agra. It is stated in tourist literature that it was commissioned in 1632 by the Mughal emperor Shah Jahan (reigned 1628–1658), to house the tomb of his favourite wife, Mumtaz Mahal. The tomb is the centrepiece of a 17-hectare (42-acre) complex, which includes a mosque and a guest house, and is set in formal gardens on three sides. It is said that Taj Mahal was built from Makrana marble.

The Taj Mahal was designated as a UNESCO World Heritage Site in 1983. Described by Nobel laureate Rabindranath Tagore as "the tear-drop on the cheek of time", it is regarded by many as the best example of Mughal architecture and a symbol of India's rich history. The Taj Mahal attracts 7-8 million visitors a year.

The controversy about Taj Mahal 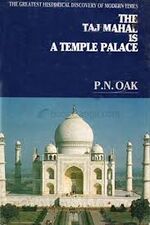 Some historians have challenged the story about Taj Mahal being propagated as having been built by Shah Jahan. In his book Taj Mahal: The True Story, historian P.N. Oak claims that the Taj Mahal was originally a Shiva temple named Tejo Mahalaya seized by Shah Jahan and adopted as a tomb. He says that Mahal is a word to describe a royal palace and not a tomb and after seizure by Shah Jahan, the name was changed to Taj Mahal. These historians opine that Taj Mahal is one of the old buildings occupied forcibly by Muslim rulers; and that, after giving a different external shape and Arabian/Persian inscriptions installed on the walls, forced the writers of history to propagate that those buildings and castles were built by those Muslim rulers. 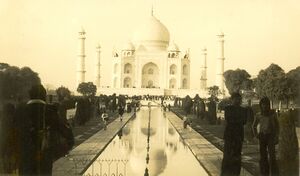 There are large number of Tejaji temples in India in the states of Rajasthan, Gujarat, Madhya Prdesh, Uttar Pradesh and Haryana. The book, Taj Mahal: The True Story (ISBN 0-9611614-4-2), written by Purushottam Nagesh Oak or P. N. Oak, the founder-president of the Institute for Rewriting Indian History. The book seeks to prove that the Taj Mahal was originally a Hindu temple whose existence predated the Mughal Empire. The people who dominate the Agra region are Jats. Shiva bears thousand names. There are two names based on Teja (Tejo in Rajasthani) in this list, namely: Tejomayadyutidhara, Tejonidhi. Jats know Shiva by the name Tejaji. The Jat special issue of The Illustrated Weekly of India (June 28, 1971) mentions that the Jats have the Teja Mandirs, i.e., Teja Temples. This is because Teja-Linga is among the several names of the Shiva Lingas. From this it is apparent that the Taj-Mahal is Tejo-Mahalaya, The Great Abode of Tejaji.[1]

The following points are among the pieces of evidence presented:

Tajmahal is a Hindu Temple Palace