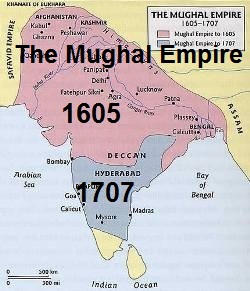 Map of the Mughal Empire

The Mughal Empire (Urdu: مغلیہ سلطنت‎, translit. Mughliyah Salṭanat - मुगलिया सल्तनत) or Mogul Empire, or Mughal Sultanate was an empire in the Indian subcontinent, established and ruled by a Muslim dynasty of Chagatai Turco-Mongol origin from Central Asia. The dynasty, though ethnically Turco-Mongol, was Persianate in terms of culture.

Though theoretically the Mughal Empire existed from 1526 to 1857, de facto, it was at the peak only till the death of its sixth emperor, Aurangzeb in 1707. After that, it shrunk to a tiny area around Delhi, so much so, that there is a saying in Persian -

Sultanat-e Shah Alam, Aj Dilli ta Palam
(the empire of Shah Alam is confined from Delhi to Palam only). (Palam is the name of a village in Delhi where the International Airport in Delhi is located).

Causes of fall of the Empire

Historians have offered numerous explanations for the rapid collapse of the Mughal Empire between 1707 and 1720, after a century of growth and prosperity. In fiscal terms the throne lost the revenues needed to pay its chief officers, the emirs (nobles) and their entourages. The emperor lost authority, as the widely scattered imperial officers lost confidence in the central authorities, and made their own deals with local men of influence. The imperial army, bogged down in long, futile wars against the more aggressive Marathas lost its fighting spirit. Finally came a series of violent political feuds over control of the throne. After the execution of emperor Farrukhsiyar in 1719, local Mughal successor states took power in region after region.

Around Delhi, after demise of Aurangzeb in 1707, Jats had established a strong empire in Bharatpur and elsewhere. Similarly, Sikhs in Punjab established their own small states called Misls. In southern India, Marathas became stronger and in the East, Bengal had got small independent kingdoms. In 1857, a great war was fought against the rule of East India Company and the last Mughal emperor, Bahadur Shah Zafar lost his tiny Kingdom and was jailed to Rangoon, leading to complete elimination of Mughal Empire.