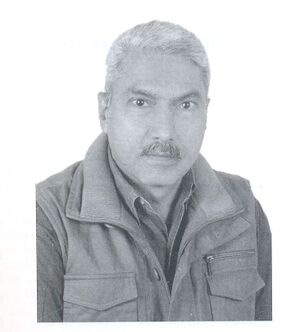 Sahi Ram Chaudhary (सहीराम चौधरी) (Baloda) is a writer, author and retired Aditional Commissioner of Tax Department in Rajasthan. Now he is an advocate in Rajasthan High Court Jaipur. He has authored two books:

1. Ek adhūrī krānti (एक अधूरी क्रांति): About Socio-political history of Rajasthan, particularly peasant's movement around 1947 and before. It was published in year 1995. It has﻿ become a reference book for research scholars on the peasants movements and other topics. This book was awarded a prize and citation, received rave reviews and was acclaimed by various social organizations﻿. For details about the book see the link - Ek Adhuri Kranti

He was born in a village Dabri Baloda in Jhunjhunu district, Rajasthan. He completed School Education from Seth Piramamal Higher Secondary School Baggar. He studied Science and Law at Rajasthan University Jaipur.

He joined Rajasthan State Administrative Service in 1980 as Commercial Tax Officer. He served at Jodhpur, Udaipur, Ajmer, Bharatpur, Jaipur and Alwar. He retired from the post of Addl Commissioner of Tax Department Jaipur in year 2014.

From the Book - Under the Peepul tree

[p.9]:Here, in our desert land, we are endowed with a peculiar art of story telling. This art is as ancient as our deserts are. In fact, it has passed from generation to generation and is still a living and vibrant tradition.

A fabulist from nowhere will appear at a marriage party and begin to entertain the people with his tales. An elderly man, sitting in the village-square or attending a funeral feast, reclining in the shadow of a tree during the hot mid-day summer or smoking near the fire in the cold winter, can be found narrating tales to his audience. A peasant weeding weeds, harvesting crops, visiting a villagefair can be seen amusing his companions with his fables and anecdotes.

One such tale, told by a middle-aged peasant, Karna, is narrated here. He lived in his village till adulthood. Then he went to the neighboring town with his friend, Seru, to work in a cotton mill. Each night after the sandstorm had passed, the inmates of the mill compound would gather together around our migrant peasant, who would spread his mat in front of his house and tell stories to an eager audience. Karna's story spans two and half decades in the life of the people of his village and he is a part of almost all the events. He has lived it, witnessed it, and when he is not present, he is able to imagine what has transpired.

Karna is semi-literate, but his life in the village and then his job in the town developed his awareness of life and he learnt all the ins and outs of the system. He has a passion for storytelling and the families living in the sick-mill colony have nothing to do and so it goes on piecemeal, night after night. In fact this tale is in an area-specific oral diction, rushing through the distinct style of the narrator.