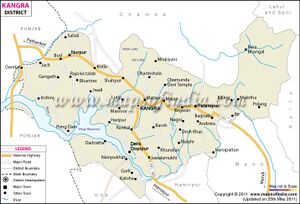 The history of Guleria clan is available from 7th century. It is said that the Guler clan had a state in Himachal Pradesh about in 7th century. Guler state was situated to S.W. of Kangra. Its capital was Haripur Guler. The smaller chiefship of Guler was offshoot from the parent stem of Kangra. The independence of Guler, or Haripur, was established by Hari Chandra, about A.D. 1400, when he yielded Kangra to his younger brother, Karmma Chandra. [14]

Alexander Cunningham[15] describes about the Hill States of the Punjab as the Chinese pilgrim Hwen Thsang has noticed so few of the many hill-states of the Panjab.

According to popular opinion the petty states of the Alpine Panjab, at the present time, consist of twenty-two Muhammadan and twenty-two Hindu chiefships, the former lying to the west, and the latter to the east of the Chenab river. [16]

An older classification divides them into three groups, each named after the most powerful state which formed the head of the confederation[17]. These were:

This division into three groups most probably existed prior to the seventh century, as we find that the states to the east of the Ravi were quite independent of Kashmir, while those of Urasa, Punach, and Rajapuri are spoken of in such a way as to show that they had kings of their own previous to their subjection by Kashmir.[18]

The Gakar chiefs hold the lower valley of the Jhelam, and the upper course of the Haro river to the south-west of Kashmir. The Gakars also occupy several portions of the eastern Doab, as Guliana, near Gujar Khan, and Bugial, under the lofty hill of Balnath. But these districts do not properly belong to the hills, although they were subject to Kashmir at the time of Hwen Thsang's visit in the seventh century. [19]

Alexander Cunningham[20]provides us the list which gives the names and positions of the various states attached to the eastern, or Jalandhar (Trigartta) division of the Alpine Panjab.

Of these twelve states no less than five are mere subdivisions of the once rich kingdom of Jalandhar, which embraced the whole of the Doab, or plain country, between the Bias and Satlej, and all the hill country lying between the Ravi and the frontiers of Mandi and Sukket, to the south of the Dhaola-dhar mountains. This included Nurpur, Kotila, and Kotlehar ; and as Mandi and Sukhet were at first under one rule, there were originally only four chiefships in the eastern division of the Alpine Panjab, namely, Jalandhar, Chamba, Kullu, and Mandi.

Alexander Cunningham[21] writes that Since the occupation of the plains by the Muhammadans, the ancient kingdom of Jalandhara has been confined almost entirely to its hill territories, which were generally known by the name of Kangra, after its most celebrated fortress.

Alexander Cunningham[22] writes that The royal family of Jalandhara and Kangra is one of the oldest in India, and their genealogy from the time of the founder, Susarma Chandra, appears to have a much stronger claim to our belief than any one of the long strings of names now shown by the more powerful families of Rajasthan. All the different scions of this house claim to be of Somavanshi descent ; and they assert that their ancestors held the district of Multan and fought in the Great War on the side of Duryodhan against the five Pandu brothers. After the war they lost their country, and retired under the leadership of Susarma Chandra to the Jalandhar Doab, where they established themselves, and built the stronghold of Kangra.

Alexander Cunningham writes that In the seventh century, the Chinese pilgrim, Hwen Thsang, was courteously entertained for a whole month by Raja U-ti-to, or Udita,[23] whom I would identify with Adima of the genealogical lists. One hundred and sixty years later, in an inscription dated A.D. 804, the Raja of Jalandhara is named Jaya Chandra, who is the Jaya Malla Chandra of the lists, the seventh in descent from Adima. Lastly, Ananta, king of Kashmir, from A.D. 1028 to 1081, married two daughters of Indu Chandra, [24] Raja of Jalandhara, who is the Indra Chandra of the genealogical lists of Kangra. These instances are sufficient to show that Jalandhara existed as an independent State for many centuries before the Muhammadan conquest. [25]

The smaller chiefships of Guler, Jaswal, Datarpur, and Siba, are offshoots from the parent stem of Kangra. The independence of Guler, or Haripur, was established by Hari Chandra, about A.D. 1400, when he yielded Kangra to his younger brother, Karmma Chandra. [26]

The date of the foundation of the other principalities is unknown, but I believe that they were always tributary to the parent state until the time of the Muhammadans, when the capture of Kangra by Mahmud of Ghazni afforded them an opportunity of asserting their independence. [27]

Raja Utito, mentioned by Chinese pilgrim Hwen Thsang, was a tributary of Harsh Vardhana, who appear to have continued to rule over the country right up to the 12th century, with occasional interruptions, but their capital was Jalandhar and Kangra formed an important stronghold.

We find in above description provided by Alexander Cunningham that Guliana Rawalpindi (p.132) represented by Mohammadans and Guler state to S.W. of Kangra (p.136) represented by Hindu chiefs of Guler. We may believe that these were the ancestors of Guleria clan.

H.A. Rose[28] writes that the ancient ruling family of Datarpur belongs to Dadwal Rajput clan are said to take its name from Dada in Kangra on the Hoshiarpur border. The Dadwals are found in the neighbourhood of Datarpur, the seat of their former sovereignty, and on the south-west face of the Siwaliks in Hoshiarpur tahsil near Dholbaha and Jatiauri or Jankapuri, its ancient name, which is still used. Janak was an ancient Surajbansi ruler. The Dadwals are a branch of the Katoch and do not intermarry with them, or with the Golerias or Sibāyas on the ground of a common descent. They have an interesting local history which describes how they wrested the tract round Datarpur from a Chahng rāni.

H.A. Rose[29] writes: Golera (गोलेरा), a tribe which gives its name to the tract in Rawalpindi so called. It is descended from its eponym, the third son of Qutb Shah, and in Sialkot has four branches, Golera, Kahambdrah, Dengla and Mandu.

According to Cracroft the Golera are Awans, a statement confirmed by their claim to descend from Qutb Shah.

Goleria (गोलेरिया), an offshoot of the great Rajput clan, the Katoch, bearing a territorial designation from Goler.

Rajatarangini[30] tells that The king Jayasimha (1128 - 1155 AD) of Kashmir killed the rebellious Chhuḍḍa, the younger brother of the lord of Koundha by secret punishment. The king also destroyed Vikramaraja and other kings in Vallapura &c., and raised Guhlaṇa and others to sovereignty. This sun among sovereigns, enriched honorable men out of his affection for them by giving them possession of beautiful lands in Kanyakubja and other places. (p.219) (Guhlaṇa→Guleria)

Rajatarangini [31] tells that ...The two girls whom the Damara had wished to give to Bhoja of Kashmira, were given by him to Parmmadi and Gulhana, sons of the king, now that Bhoja was worsted. (p.270) (Gulhana→Guleria)

Gulhana made king of Lohara

Rajatarangini[32] tells.... The king then anointed Gulhana, the eldest of the sons of Raḍḍādevi, as king of the prosperous kingdom of Lohara. That prince was aged six or seven years, and he surpassed older kings, as a young mango tree surpasses worn out trees. As the queen Raḍḍā went to anoint her son, the feudatory kings bowed to her, and reddened her feet by the rays of the rubies on their heads, as if by red paint. When the prince was anointed, the clouds, as if in compliance with, the wishes of the queen, drenched the earth which had been dried up by a fearful drought. [VIII (ii), p.306]

H. W. Bellew[33] writes that the Khattak are two great divisions — Torman and Bolac. Torman, or Turan, is in two divisions — Tari and Taraki. Tari section includes Gul, who are for Goel or Gohil Chohan.

Guler was a small precolonial Indian hill state in the Lower Himalayas. Its capital was the town of Haripur Guler, in modern-day Kangra district of Himachal Pradesh. The kingdom was founded in 1415 by Raja Hari Chand, a scion of the ancient royal family of Kangra. Raja Hari Chand, 1st Raja of Guler 1415 AD, he was originally the Raja of Kangra to 1415, but whilst hunting one day, he fell into a dry well, and was presumed dead, his brother was then named Raja of Kangra; he was eventually discovered, but rather than fight over his rights, he founded the town of Haripur on the flat below the fort, on the Banganga River; married and had issue.[34]

History of Guleria clan from year 1573 AD is recorded by Pitha Ram Guleria in Sujangarh Jat Samaj Nirdeshika, 2015,pp.5-7. It states that two Guleria brothers developed differences with the thakur of Ladariya in Didwana tahsil of Nagaur district in Rajasthan over the issue of Tax collection. They came near the border of Jodhpur State and founded Gulerion Ki Dhani in 1573 AD at present Sujangarh where there was good soil and drinking water. When their population increased the Guleria people changed the name hamlet to 'Kharbuji Dhani' after person named Kharbuji Guleria in 1723 AD. Later thakur of Sandwa Churu constructed a fort here and it was called Kot Kharbuja/Kharbuji Kot/Kharbuji Ra Kot.[35] Its name changed to Sujangarh after Sujan Singh who became ruler of Bikaner[36] in 1737 AD.[37]

It is matter of research how and when they came from Kangra (Himachal Pradesh) to Ladariya in Didwana tahsil of Nagaur district in Rajasthan. It is likely that they migrated after the invasion of Mahmud of Ghazni (997 to 1030 AD). 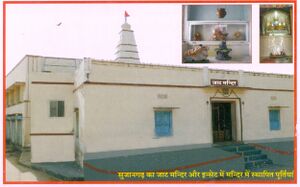 Villages in Ratlam district with population of Guleriya (गुलेरिया) gotra are:

Trigarta (Trigart Raje) Dynasty (BC unknown) mentioned as rulers of Magadha are: