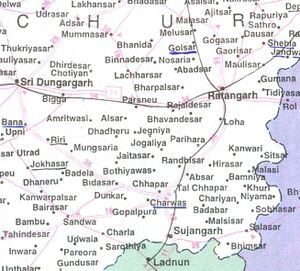 Location of villages around Sujangarh in Churu district

Salasar Balaji (सालासर बालाजी) is a place of religious importance for the devotees of Lord Hanuman in Sujangarh tahsil of Churu district in Rajasthan.

Salasar Balaji was known by the names: 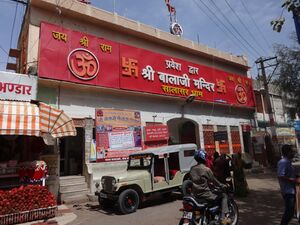 Indian Airlines and Jet Air fly to Jaipur, from where Salasar is 3.5 hours drive in Taxi or Bus. Sujangarh, Sikar, Didwana, Jaipur and Ratangarh are the nearest railheads for Salasar Balaji.

This city is about 170 KM from the city of Pilani that hosts BITS, Pilani University. The road from Delhi to Pilani is very good. One must take a route via Rewari, Narnaul, Shinghana, Chidawa, Pilani. For Salasar, there is a direct road from Shinghana and one may not required to go to Chidawa. Balaji is a good place for tourists. 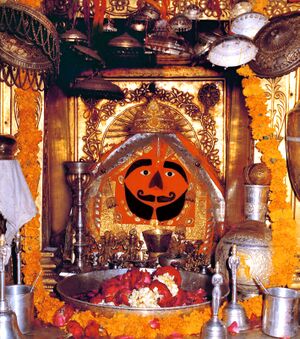 Salasar Dham attracts innumerable Indian worshipers throughout the year. On Chaitra Poornima and Ashvin Purnima large fairs take place in the area when more than 6 to 7 lakhs of people assemble here to pay their homage to the deity. Hanuman Sewa Samiti looks after the management of the Temple and the fair. There are many Dharamshalas to stay and Indian restaurants to eat. Salasar Dham is situated in Salasar town. 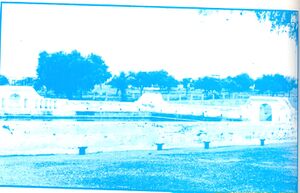 About five centuries back the present Salasar area was inhabited by Gandas gotra Jats and known as 'Gandas ki Dhani'. At one time there became a severe scarcity of drinking water due to famines in the area. A saint came to the village at that time and on the request of villagers pointed out a spot to dig a well suitable for drinking water. At the same time he warned that the person who would dug the well would meet death. The villagers thought it better to leave the place and the Gandas people moved away. [2]

Later on the area was occupied by Tetarwal Gotra Jats and named the village Tetarwal ki Dhani. They dug a well which is still used as source of water and called 'ganwai-kuan'. About three centuries back Shekhawat thakurs came from village Rewasa and started living in village Purnpura which was earlier known as Gugrana. Gugrana thakur Banwaridas came to village Naurangsar in Churu district and started living there. His eldest son thakur Salam Singh occupied this area and changed the place name from Tetarwal ki Dhani to Salamsar which became Salasar over a period of time. [3]

The site of Salasar Balaji was discovered by one Ginthala Jat of village Asota of district Nagaur.

On Saturday, Shravan Shukla-Navami -Samvat 1811 (1754 AD), a miracle happened. A Ginthala Jat farmer of village Asota in district Nagaur of Rajasthan was ploughing his field. All of sudden the plough was hit by some stony thing and the sound - thlikk ... was created. He dug up the soil of that place and found an idol covered with sand. His wife reached there with his lunch packet. The farmer showed the idol to his wife. She cleaned up the idol with her sari (dress). The idol was that of Balaji i.e. Lord Hanuman. They bowed their heads with devotion and worshipped Lord Balaji. The news of appearance of Lord Balaji spread in the village Asota immediately. The Thakur of Asota also heard the news. Balaji ordered him in the dream to send the idol to Salasar in the Churu district. Same night a devotee of Lord Hanuman, Mohan Dasji Maharaj of Salasar saw Lord Hanuman or Balaji in dream. Lord Balaji told him about the idol of Asota. He immediately sent a massage to Thakur of Asota. The thakur was surprised to know - How Mohandasji knew minor details without coming to Asota? Certainly it was a kindness of Lord Balaji. The idol was sent to Salasar and was fixed at the place known as Salasar Dham. [4]

Mohandas got constructed a temple mud-stone temple here in samvat 1815 (1758 AD) with the help of Noora and Dau muslim karigars of Fatehpur Shekhawati. The cashier of Sikar Jagirdar Rao Devi Singh got constructed temple as he was once saved from loot by Dungji-Jawaharji by the blessings of Balaji. [5] Sikar Jagirdar Devi Singh did not have a son. He heard about Balaji and came to this place and tied a coconut on the jal-tree to fulfill his wish of a son. Devi Singh got a handicapped son Laxman Singh after ten months. The custom of tying coconut to fulfill wish continues from that time onward. [6]

Later on, Mohandas handed over the work of worshipping of Balaji to his bhanja (nephew), Udayram and appointed him the first pujari (priest) of the temple. A patta of the land was made in the name of Balaji in the presence of Shobhasar thakur Dhiraj Singh, Salasar thakur Salam Singh and elders of Tetarwal Jats. [7] 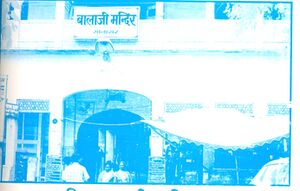 Dhunia of Mohandas ji is the place where the holy fire lit by great devotee Mohandas ji is still burning. The devotees take holy ashes from here. It's in the Balaji temple jai hanuman

Sri Mohan Mandir is situated near Balaji temple. The footprints of Mohandasji and Kanidadi are found there. This place is the samadhi sthal of both holy devotees. The continuous Ramayan reading has been taking place here from last eight years. In the temple premises of Lord Balaji, Akhand Hari Kirtan (Chanting of the name of Rama) is continuing for last 20 years.

Two Bullock Carts of the age of Mohan Dasji are placed here in the Balaji Mandir premises.

Shayanan Mata Mandir situated about 15 km from here on a unique hillock in the desert area & about 1100 years old is worth visiting.

There are 50-60 Dharamshalas in Salasar Balaji Dham. Most of these are run by trusts. Some independent Dharamshalas are also there. Some of the Dharamshalas to mention are: -