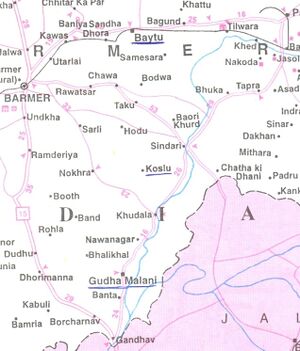 Gudha Malani (गुढा मालानी) is a town and tehsil in Barmer district. Its PIN Code is Gudha Malani-344031. The Malani region was known as Radadhara (राड़धरा) or Lataharda (लाटर्हद) in ancient times.

Malani or Mallani clan is found in Afghanistan.[1]

According to James Tod Mallani are Chauhans.

Malani (मालानी) is the name of region around this town in Barmer district in Rajasthan. The western part of present Barmer district is known as Malani. It was a border district of the princely state of Jodhpur prior to Independence. Adjoining this area is the Sindh province of Pakistan. Its extent was in a length of 100 miles from Jasol to Sindh and 75 miles wide. This pargana had 503 villages. [2]

James Tod[3] writes that Nagar Gurha. — Between Barmer and Nagar-Gurha on the Luni is one immense continuous thal, or rather rui, containing deep jungles of khair, or kher, khejra, karil, khep, phog, whose gums and berries are turned to account by the Bhils and Kolis of the southern districts. Nagar and Gurha are two large towns on the Luni , on the borders of the Chauhan raj of Suigam, and formerly part of it.

James Tod[4] writes that Juna Chhotan, or the ' ancient ' Chhotan, though always conjoined in name, are two distinct places, said to be of very great antiquity, and capitals of the Hapa sovereignty. But as to what this Hapa Raj was, beyond the bare fact of its princes being Chauhan, tradition is now mute. Both still present the vestiges of large cities, more especially Juna, ' the ancient,' which is enclosed in a mass of hills, having but one inlet, on the east side, where there are the ruins of a small castle which defended the entrance. There are likewise the remains of two more on the summit of the range. The mouldering remnants of mandirs (temples), and baoris (reservoirs), now choked up, all bear testimony to its extent, which is said to have included twelve thousand habitable dwellings ! Now there are not above two hundred huts on its site, while Chhotan has shrunk into a poor hamlet. At Dhoriman, which is at the farther extremity of the range in which are Juna and Chhotan, there is a singular place of worship, to which the inhabitants flock on the tij, or third day of Sawan of each year. The patron saint is called Alandeo, through whose means some grand victory was obtained by the Mallani. The immediate objects of veneration are a number of brass images called Aswamukhi, from having the ' heads of horses ' ranged on the top of a mountain called Alandeo. Whether these may further confirm the Scythic ancestry of the Mallani, as a branch of the Asi, or Aswa race of Central Asia, can at present be only matter of conjecture.

The Cairn company has drilled more than 50 oil wells in Gudha Malani, Sindhari, Baytu and Sheo areas of Barmer district. The oil was struck for the first time by the company at Malion Ki Dhani near Bhakharpura Gudha but the well was capped as the reserve was very low. [5]