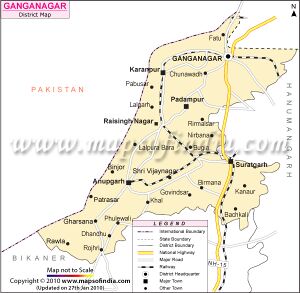 Location of Suratgarh in Ganganagar District

Suratgarh (सुरतगढ़) is a town and tahsil in Ganganagar District in Rajasthan. Its Old name was Sodhal (सोढल), name was converted to Suratgarh by Surat Singh of Bikaner. [1] Raj Singh Rathore succeeded his father Gaj Singh, S. 1843 (A.D. 1787), but he enjoyed the dignity only thirteen days, being removed by a dose of poison by the mother of Surat Singh, who was the fifth son of Raja Guj Singh. [2]

James Tod[3] has provided us the History of Surat Singh, the founder of Suratgarh, as under. Thus, in one short year after the death of Raja Raj, the gadi of Beeka was dishonoured by being possessed by an assassin of his prince. In S. 1857 (A.D. 1801), the elder brothers of the usurper, Surtan Sing and Ajib Sing, who had found refuge in Jaipur, repaired to Bhatner and assembled the vassals of the disaffected nobles and Bhattis in order to dethrone the tyrant. But the recollection of his severities deterred some, while bribes kept back others, and the usurper did not hesitate to advance to meet his foes. The encounter, which took place at Bigor, was obstinate and bloody, and three thousand Bhattis alone fell. This signal victory con­firmed Surat Singh's usurpation. He erected a castle on the field of battle, which he called Fatehgarh, ' the abode of victory.'

Shortly after, he eagerly availed himself of an opportunity to punish the excesses of the Daodpotras, and to withdraw attention from himself, by kindling a popular war against these powerful and turbulent neighbours. The occasion was the Kerani chief of Tearoh demanding his aid against his liege lord, Bahawal Khan. As these border feuds are not extinguished even in these days of universal peace, it may not be uninteresting to see the feudal muster-roll of

[p.169]: the desert chiefs on such occurrences, as well as the mode in which they carry on hostilities. It was very shortly before that victory had preponderated on the side of the Rathores by a gallant coup-de-main of the lord marcher of Bikaner, who carried the castle of Mojgarh in a midnight assault. The hero on this occasion was not a Rathore, but a Bhatti chief, in the service of Bikaner, named Hindu Sing, who gained 'immortality' by the style in which he scaled the walls, put Mahomed Maroop Kerani, the governor, and the garrison to the sword, and brought away captive to Bikaner the governor's wife, who was afterwards ransomed for five thousand rupees and four hundred camels.

The outlaw who sought sirna at Bikaner, on this occasion, was of the same tribe, Kerani, his name Khudabaksh ('gift of God'), chief of Tearoh, one of the principal fiefs of the Daodpotras. With all his retainers, to the amount of three hundred horse and five hundred foot, he threw himself on the protection of Surat Sing, who assigned him twenty villages, and one hundred rupees daily for his support. The Keranis were the most powerful vassals of Bahawal Khan, who might have paid dear for the resumption of Tearoh, whose chief promised the Rajpoot nothing less than to extend his conquests to the Indus. Allured by this bait, the khir was proclaimed and the sons of Beeka assembled from all quarters.

The command-in-chief of this brilliant array was conferred on Jaitroh Matoh, son of the Dewan. On the 13th of Magh 1856 (spring of 1799) he broke ground, and the feudal levies fell in on

[p.170]: the march by Kunasar, Rajasar, Kaili, Ranair, and Anoopgarh, the last point of rendezvous. Thence he proceeded by Seogurh,1 Mozgurh, and Phoolra, all of which were taken after a few weeks' siege, and from the last they levied a lakh and a quarter of rupees, with other valuables, and nine guns. They advanced to Khairpur, within three miles of the Indus, when being joined by other re­fractory chiefs, Jaitroh marched direct on the capital, Bahawalpur, within a short distance of which he encamped preparatory to the attack. The Khan, however, by this delay, was enabled to detach the most considerable of his nobles from the Rajpoot standard : on which the Bikaner Dewan, satisfied with the honour of having insulted Bahawalpur, retreated with the spoils he had acquired. He was received by the usurper with contempt, and degraded for not fighting.

The Bhattis, smarting with the recollection of their degradation, two years after the battle of Bigor attempted the invasion of Bikaner, but were again repulsed with loss ; and these skirmishes continued until S. 1861 (A.D. 1805), when Raja Surat attacked the Khan of the Bhattis in his capital, Bhatner. It capitulated after a siege of six months, when Zabta Khan, with his garrison and effects, was permitted to retire to Rhania, since which this place has remained an appanage of Bikaner.

The coalition against Jodhpur was ruinous to Surat, who supported the cause of the pretender, on which the usurper expended twenty-four lakhs of rupees, nearly five years' revenue of this desert region. On this occasion, he led all his troops in person against Jodhpur, and united in the siege, which they were however compelled to abandon with dishonour, and retrograde to their several abodes. In consequence of this, the usurper fell sick, and was at the last extremity ; nay, the ceremonies for the dead were actually commenced ; but he recovered, to the grief and misery of his subjects. To supply an exhausted treasury, his extortions know no bounds ; and having cherished the idea that he might compound his past sins by rites and gifts to the priests,he is surrounded by a group of avaricious Brahmins, who are "maintained in luxury at the expense of his subjects. His cruelty keeps pace with his avarice and his fears. The chief of Bhukarka he put to death, notwithstanding his numerous services. Nahar Sing of Sidhmukh, Gyan Sing and Goman Sing of Gandheli, among the chief feudatories of the state, shared the same fate. Churu was invested a third time, and with its chief, fell into the tyrant's hands.

1. Its former name was Bullur, one of the most ancient cities of the desert, as is Phoolra, a Johya possession.