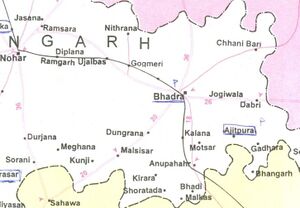 It is situated at approx 30 KM North-East of Tehsil Bhadra on Bhadra-Hisar road. 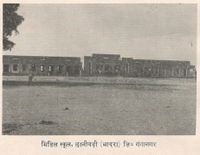 James Tod[1] has provided us the History of Surat Singh, the founder of Suratgarh. After the death of Raja Raj, the gadi of Beeka was dishonoured by being possessed by an assassin of his prince. In S. 1857 (A.D. 1801), the elder brothers of the usurper, Surtan Sing and Ajib Sing, who had found refuge in Jaipur, repaired to Bhatner and assembled the vassals of the disaffected nobles and Bhattis in order to dethrone the tyrant. But the recollection of his severities deterred some, while bribes kept back others, and the usurper did not hesitate to advance to meet his foes. The encounter, which took place at Bigor, was obstinate and bloody, and three thousand Bhattis alone fell. This signal victory con­firmed Surat Singh's usurpation. He erected a castle on the field of battle, which he called Fatehgarh, ' the abode of victory.'