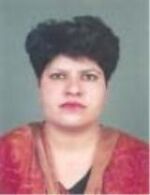 Rita Choudhary (रीटा चौधरी) has been the Member of Legislative Assembly of Rajasthan from Mandawa constituency, District Jhunjhunu. She was MLA for the period 2008-2013, from Indian National Congress.

During December 2018 elections, she was again elected as MLA from Mandawa constituency, as a candidate of Indian National Congress.

She is the daughter of senior Congress Jat Leader, Ch. Ram Narain Choudhary from village Hetamsar in Jhunjhunu district, Rajasthan.