He was born in village of Hetamsar in Jhunjhunu district in the family of Sh. Maliram Choudhary on 22 February, 1928. He was Intermediate.

He was married with Smt. Parmeshwari and was father of two sons and three daughters. His daughter Reeta Chaudhary is a Congress legislator from Mandawa constituency in Jhunjhunu district.

Chaudhary was a prominent Jat leader and was elected to the state assembly seven times, starting from 1967. He served as Cabinet Minister in important departments like Cooperative, Local Bodies, Panchayat, PHED, Transport, Jail, PWD etc. He was leader of opposition also.[1]

Chaudhary once even served as deputy Speaker in the state assembly. He was Rajasthan Pradesh Congress Committee's president from 1980-82. Chaudhary was born in Jhunjhunu district's Hetamsar village on February 22, 1928. He had been with the Congress since the country's first free elections in 1952. 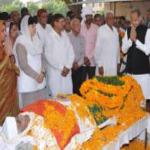 Veteran Congress leader and former minister Ram Narayan Chaudhary (84) was cremated with state honours in his hometown Jhunjhunu on Thursday at Jat Boarding Jhunjhunu. His daughter Reeta Chaudhary, who is a Congress legislator from Mandawa constituency in Jhunjhunu district, lit the funeral pyre. Besides Reeta, the Congress leader is survived by two sons and two daughters.

Chaudhary, who was suffering from lung infection for a long time, breathed his last at a private hospital in Jaipur on Wednesday midnight. He was under the doctors' observation since August 31.