Location of Jhalrapatan in District Jhalawar

Jhalrapatan town and tahsil in Jhalawar district in Rajasthan.

The ruins of the city cover an area of more than a mile from east to west and about a mile from north to south. Several specimens of punch marked and other old coins have been discovered, confirming the antiquity of the place.

Jhalrapatan is specially famous for its large number of temples. Of the early temples, about four or five still survive.

James Tod [1]writes that the city Jhalrapatan, which, besides its metaphorical appellation of the " city of bells," had the name of Chandravati, and the rivulet which flowed through it, the Chandrabhaga. There is an abundance of legends, to which we may be enabled to apply the test of inscriptions. In some. Raja Hoon is again brought forward as the founder of the city ; though others, with more probability, assign its foundation to the daughter of Chandrasen, the Pramar king of Malwa, who was delivered of a son on this spot while on a pilgrimage.

Another ascribes it to a more humble origin than either, i. e. to Jussoo, a poor wood-cutter of the ancient tribe of Or, who, returning home-wards from his daily occupation, dropped his axe upon the parisputtur, with the aid of which he transmuted iron to gold, and raised " the city of the moon" (Chandravati) ; and the lake is still called after him Jussoo Or ca-talabh.

The Pandu Bheem likewise comes in for his share of the founder's fame ; who, with his brethren during their covenant with the Kaorea, found concealment in the forest; but his foe, fearing the effect of his devotions, sent his familiar to disturb them. The spirit took the form of a boar, but as he sped past him through the thicket, Bheem discharged an arrow, and on the spot where this fell, the Chandrabhaga sprung up. Whoever was the founder, I have little doubt that tradition has converted Jussoo-verma, the grandson of Udyadit, the monarch of all Malwa,

[p.671]: into the wood-cutter ; for not only does this prince's name occur in one of the inscriptions found here, but I have discovered it in almost every ancient city of Central India, over which his ancestors had held supreme power from the first to the thirteenth century of Vicrama.

On a stone tablet, which I discovered at Boondi, of the Takshac race, are the names both of Chandrasen and Jussoo-verma, and though no date is visible, yet that of the latter is fixed by another set of inscriptions, inserted in the first volume of the Transactions of the Royal Asiatic Society, at S. 1191 or A.D. 1135 : the period when the old Hindu monarchies were breaking up, and consequently the arts beginning to decay.

The sites of temples mark the course of the stream for a considerable distance, the banks being strewed with ruins. Flights of steps, forming ghats, reach to the water's edge, where multitudes of gods, goddesses, and demons, are piled, and some of the more perfect placed upon altars of clay, around which some lazy, well-fed Gosens loiter, basking in the sun. Understanding that no umbrage could be taken if I exported some of them to Oodipoor, I carried off Narayana on his hydra-couch, a Parbutty, a tri-murti, and a cart-load of the dii minores, which I found huddled together under a burr-tree. There was a fine statue of Ganesa, but our efforts to move Wisdom wore ineffectual, and occasioned not a few jokes among my Brahmins ; nor must I pass over a colossal baraha (boar), of which no artist in Europe need be ashamed.

The powers of Destruction and Re-production were those propitiated among the one hundred and eight shrines of Chandravati ; of which only two or three imperfect specimens remain to attest the grandeur of past days. Everywhere, the symbolic lingam was. scattered about, and the munduf of one of those still standing I found filled with representations of the Hindu Hecate and a host of lesser infernals, the sculpture of which, though far inferior to that at Barolli, is of a high order compared with aught of modern times.

The attitudes are especially well-managed, though there is a want of just proportion. Even the anatomical display of the muscles is attended to ; but the dust, oil, and sindoor (vermilion) of twelve centuries were upon them, and the place was dark and damp, which deterred us from disturbing them.

Ghassi is now at work upon the outline of two of the remaining shrines, and has promised to give up ten days to the details of the ceilings, the columns, and the rich varied ornaments, which the pencil alone can represent. One of these shrines, having a part of the sengar chaodi still standing, is amongst the finest things in Asia, not for magnitude, being to all appearance merely receptacles for the inferior divinities surrounding some grand temple, but for the sculptured ornaments, which no artist in Europe could surpass. Each consists of a simple mindra or cella, about twenty feet square, having a portico and a long open colonnaded vestibule in front for the priests and votaries. Every one of these numerous columns

[p.672]: differs in its details from the others. But the entrance chiefly excites admiration, being a mass of elaborate workmanship of a peculiar kind, and the foliage and flowers may be considered perfect. It is deeply to be lamented that no artists from Europe have made casts from these masterpieces of sculpture and architecture, which would famish many new ideas, and rescue the land sacred to Bhavani (Minerva) from the charge of having taught nothing but deformity : a charge from which it is my pride to have vindicated her.

While I remained with Ghassi, amidst the ruins, I despatched my guru, and Brahmins to make diligent search for inscriptions ; but many of these, as well as thousands of divinities, the wrecks of ancient Patun, have been built up in the new town or its immense eircumvallation ; but our efforts were not altogether unrewarded.

The oldest inscription, dated S. 748 (A.D. 691), bore the name of Raja Doorgangul, or ' the bar of the castle'. It is very long, and in that ornamented character peculiar to the Buddhists and Jains throughout these regions.

* The allusion to this affords another instance of the presumption of the priests, who compelled the gods to attend the sacrificial rites, and hence Indra could not visit his consort Indrani.

[p.673]: On this curious inscription we may bestow a few remarks. It appears to me that the wild legion of the creation of this Khetri, from the blood of Baraha, represented as a danoo, or demon in disguise, is another fiction to veil the admission of some northern race into the great Hindu family. The name of Baraha, as an ancient Indo-Scythic tribe, is fortunately abundantly preserved in the annals of Jessulmer, which state, at the early periods of the Yadu-Bhatti history, opposed their entrance into India ; while both Takshac (or Tak) and Kyuk are names of Tatar origin, the former signifying 'the snake,' the latter ' the heavens.' The whole of this region bears evidence of a race whose religion was ophite, who bore the epithet of Takshac as the name of the tribe, and whose inscriptions in this same nail-headed character are found all over central and western India. If we combine this with all that we have already said regarding Raja Hoon of Bhadraoti, and Ungutsi the Hun, who served the Rana of Cheetore at this precise period* when an irruption is recorded from Central Asia, we are forced to the conclusion, that this inscription (besides many others), is a memorial of a Scythic or Tatar prince, who, as well as the Gete prince of Salpoor,†- was grafted upon Hindu stock.

The inscription next in point of antiquity was from the Jain temple in the modern town. It was dated the 3rd of Jeyt, S. 1103 (A.D. 1047), but recorded only the name of a visitor to the shrine.

Near the dam of the Or-aagur, there was a vast number of funeral memorials, termed nisea, of the Jain priesthood. One is dated " the 3rd of Magh, S. 1066 (A.D. 1010), on which day Srimunt Deo, " Chela, or disciple, of Acharya Srimana Dewa, left this world." The bust of the acharya, or doctor, is in a studious posture, the book laying open upon the thooni or cross, which forms a reading- desk, often the only sign on the nisea to mark a Jain place of sepulture.

The adjoining one contained the name of Devindra Acharya ; the the date S. 1180.

Another was of " Komar-deo, the pundea or priest of the race of Koomad Chandra Acharya, who finished his career on Thursday (goorbar) the Mool nekshitra of S. 1289."

There were many others, but as, like these, they contained no historical data, they were not transcribed.

Naraynpoor, 13th December, eleven miles. — Marched at daybreak, and about a cosa north of the city ascended the natural boundary of Harouti and Malwa ; at the point of ascent was Gondore, formerly in the appanage of the Ghatti-Rao (lord of the pass), one of the legendary heroes of past days ; and half a coss further was the point of descent into the Antri, or ' valley,' through which our course lay due north. In front, to the north-west, Gagrown, on the opposite range, was just visible through the gloom ; while the yet more

[p.674]: ancient Mhow, the first capital of the Kheechees, was pointed out five coss to the eastward. I felt most anxious to visit this city, celebrated in the traditions of Central India, and containing in itself and all around much that was worthy of notice. But time pressed; so we continued our route over the path trodden by the army of Alla-O-din when he besieged Achildas in Gagrown. The valley was full three miles wide, the soil fertile, and the scenery highly picturesque. The forest on each side echoed with the screams of the peacock, the calls of the partridge, and the note of the jungle-cock, who was crowing his matins as the sun gladdened his retreat It was this antri, or valley, that the Regent selected for his chaoi, or ' fixed camp,' where he has resided for the last thirty years. It had at length attained the importance of a town, having spacious streets and well-built houses, and the materials for a circumvallation were rapidly accumulating : but there is little chance of his living to see it finished. The site is admirably chosen, upon the banks of the Amjar, and midway between the castle of Gagrown and Jhalra-patan.

A snort distance to the west of the Regent's camp, is the Pindari- ca-chaonni, where the sons of Kureem Khan, the chief leader of those hordes, resided ; for in these days of strife, the old Regent would have allied himself with Satan, if he had led a horse of plunderers. I was greatly amused to see in this camp, also assuming a permanent shape, the commencement of an eedga, or ' place of prayer;' for the villains, while they robbed and murdered even defenceless woman. prayed five times a day !

We crossed the confluent streams of the Aou and Amjar, which , flowing through the plains of Malwa, have forced their way through the exterior chain into the antri of Gagrown, pass under its western face, dividing it from the town, and then join the Caly Sinde. 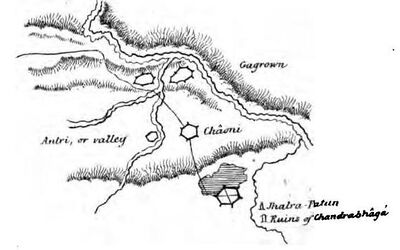 Location of Chandrabhaga near Jhalrapatan

Until you approach close to Gagrown, its town and castle appear united, and present a bold and striking object; and it is only on mounting the ridge that one perceives the strength of this position.

One such inscription is reported by R. C. Majumdar[3] from " Jhalra Patan dated 690 A.D. It mentions Raja Durgagana of the Maurya family." The author in foot note says that "The inscription has not been edited and there is only a short reference to it in IA, LVI, 213".