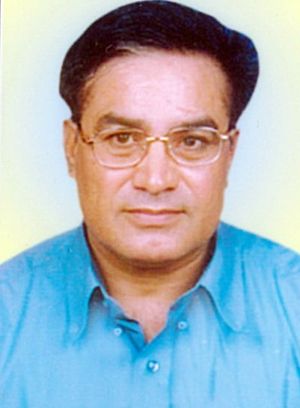 On Saturday, Shravan Shukla-Navami -Samvat 1811, a miracle happened. A Ginthala Jat farmer of village Asota in district Nagaur of Rajasthan was ploughing his field. All of sudden the plough was hit by some stony thing and the sound - thlikk ... was created. He dug up the soil of that place and found an idol covered with sand. His wife reached there with his lunch packet. The farmer showed the idol to his wife. She cleaned up the idol with her sari (dress). The idol was that of Balaji i.e. Lord Hanuman. They bowed their heads with devotion and worshipped Lord Balaji. The news of appearance of Lord Balaji spread in the village Asota immediately. The Thakur of Asota also heard the news. Balaji ordered him in the dream to send the idol to Salasar in the Churu district. Same night a devotee of Lord Hanuman, Mohan Dasji Maharaj of Salasar saw Lord Hanuman or Balaji in dream. Lord Balaji told him about the idol of Asota. He immediately sent a massage to Thakur of Asota. The thakur was surprised to know - How Mohandasji knew minor details without coming to Asota? Certainly it was a kindness of Lord Balaji. The idol was sent to Salasar and was fixed at the place known as Salasar Dham.