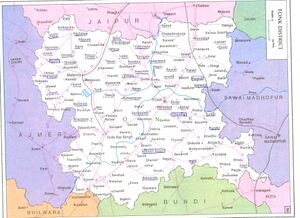 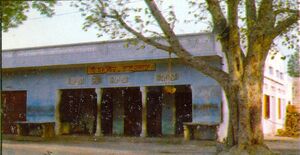 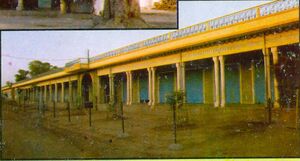 Tonk (टोंक) is a city and district in Rajasthan. Its ancient name was Tonkra (टोंकड़ा). 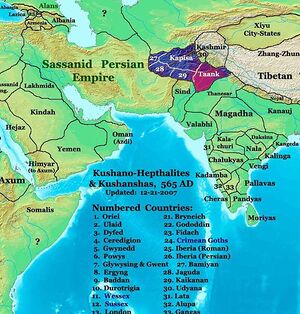 In popular Parlance, the Tank - Sarohas are mentioned together like 'Dahiya-Dabas' and 'Siddhu - Brar' combination). The Cities of Tonk, Sirohi are named after them. At one time, the entire Punjab was called Tank Desa. The reports of The Chinese pilgrims confirm this fact. Originally they were worshippers of the Snake-Garlanded form of Shiva. Hence they were called Nagas also. [3] [4] Tonk district had many Jat rulers in the past. Thakur Deshraj has mentioned about Jat rulers of following clans in his book Jat Itihas.

Khoja Jats ruled in Tonk in 11th century. The author of ‘Tarikh Rajgan Hind’ Maulvi Hakeem Majmulgani Khan has mentioned about Tonk giving its geographical description and location of Tonk town on Banas River. He has further mentioned that Khoja Ram Singh after a war at Delhi came to this place and founded Tonkra (टोंकरा) town on magha sudi teras samvat 1003 (847 AD) . After a long period on magh sudi 5 samvat 1337 (1281 AD) when Ghiyas ud din Balban won Madhaupur and Chittorgarh, this town was again inhabited and called as Tonk. Thus the descendants of Ram Singh ruled Tonk from samvat 1003 to samvat 1337 (847-1281 AD). Ghiyas ud din Balban (1266–1286), ex-slave, son-in-law of Sultan Nasir ud din Mahmud had destroyed this town, which was rehabilitated.[5]

From Tonkra village of the old Sirohi State we have an inscription of a certain Vijad, dated in the (Vikrama) year 1232.

Chandlai is a village in Tonk district of Rajasthan, India. It is situated at a distance of 10 km from Tonk city on Tonk – Kota road. A Jat chieftain ‘Chandla’ founded it. He got constructed a pucca pond near the village in the name of her daughter ‘Bhala’ and put an inscription on it on baisakh sudi 15 samvat 1027 (970 AD). This was the time when Rajasthan was ruled by a large number of small republics. Chandla was ruler of Tonk at that time.

Pirana is the name of a place at a distance of 8 km from Tonk city in north direction in Tonk district. It was a well organised republic state of Jats in earlier times. They used to collect taxes from traders and rich travelers passing through their state boundaries. They used to collect one fourth of the goods as tax. There was a system of equal right of all the brothers and castes on the land under their occupation. But in return they used to select 9 soldiers from their people for war. Every child, youth and elderly persons were committed to protect the state and sacrifice their lives.

Once a caravan of Begums of emperor Jahangir happened to pass through their state. Jat chieftain stopped the carvan and allowed to pass only when they paid taxes. Jahangir when came to know about this incident he sent his subedar Malook Khan to suppress these Jats. Malook khan knew the powers and strategy of Jat rulers so he did not attack them directly. He camped at a village called Sherpur near Ranthambore and started his planning. He allured one Doom and asked details about how he could defeat these Jat rulers. The Doom told him that on bhadwa badi 12 the Jats celebrate ‘Bachchh baras’ when all are armless. Malook khan attacked on this very date when the Jats were celebrating ‘Bachchh baras’. Jats being unarmed, many of them were killed. This way a Jat republic was destroyed.

Jiwan Singh and Raimal in Pirana were two chieftains who were killed in above attack. The pregnant ladies at the time of above attack got escaped and sent to Sanganer where they founded a town near Sanganer. The boys on their birth were named Jiwan and Raimal as decided prior to war on the name of above warriors killed. Jiwan later chose to live at a place of his ancestors and founded a new village ‘Pirana’ in the name of old village of same name. Some ladies were killed or chose to become sati after the death their husbands. There are terraces constructed in the memory of these ladies at Pirana locally known as ‘Satiyon ke chabutre’. The inscriptions on this site bear years upto samvat 1478 (1421 AD). These inscriptions indicate the period of war of Malook khan with Jats was in fourteenth century when Khilji was ruler at Delhi.

Jaipur's King Man Singh conquered Tari & Tokra Janpad in the regime of Akbar. In 1643 twelve village of Tokra janpad given to Bhola Brahmin . Later Bhola gave a name to these twelve villages as 'Tonk '. It is surrounded by 5 districts i.e. in north Jaipur, in South Bundi & Bhilwara, in East Ajmer and in West Sawaimadhopur districts. Average rain fall is 62 mm. Agriculture and animal husbandry are the main occupation of the people.

The history of Tonk is very old as it is connected with Bairath culture & civilization . Tonk has been called Rajasthan ka Lucknow, Adab ka Gulshan, Romantic poet Akhtar Shreerani ki Nagri, Meethe Kharboojo ka Chaman, Hindu Muslim Ekta ka Maskan and as result of which Tonk could keep an isolated status in Rajasthan. During the regime of Nawabs(1817 to 1974) , all the native were invited in a islamic function of Miladdunabi without caste, color and greed , which was organised by the ruling Nawabs for the period of seven days in the month of Rabiul Awwal ,collectively with all zeal in Tonk.It is further important to mention here that the first founder ruler of Tonk was Nawab Mohammed Amir Khan(Year 1824).

In 1806, Amir Khan conqurred it from Balvant Rao Holkar. Later, British government gained it from Amir Khan. As per the treaty of 1817, british government returned it to Amir Khan. In 1950 this Nawab state was formed as the District in Rajasthan state. The culture of Tonk is resembelance of Bairath culture and civilization.All festivals commonly are celebrate by the people irrespective of Caste. This district is an example fraternity and Hindu - Muslim unity.

Diggipuri is a very sacred place in the region. On every ekadashi and purnima thousands of people come for the darshan of Sri Kalyanji here. All castes have their own dharmshalas except Jat community. On 28-4-1991 the members of Jat community gathered to decide the formation of Jat Dharmshala Samiti to be chaired by Ladu Ram Chaudhary Diggi, Kishan Lal Deshama as Mantri and Sita Ram Chaupda as treasurer.

The Jat Dharmshala Samiti collected contribution from the community members of Malpura tahsil and constructed 16 rooms, a sabha bhawan, Shiva Mandir etc. They called a grand meeting of the community members and founded the Shiva Temple on 6 February 1993. This meeting was attended by Jagdip Dhankad, Gyan Prakash Pilania, Rupa Ram Murawatia, Prof. Sanwar Lal and others.

The Jat Dharmshala Samiti collected a contribution of about Rs. 1 Crore from Jat community members over a period of 7 years from 1992 to 1998. They constructed a new Dharmshala, a School with 64 rooms, a grand dinning hall, 12 bathrooms, 10 latrines, tube wells etc here at Diggi. 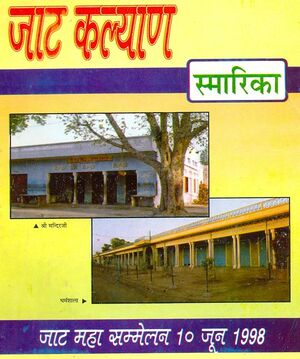 The Jat Dharmshala Samiti organized a grand Jat sammellan on 10 June 1998 and published a smarika 'Jat Kalyan Smarika' on this occasion. This smarika has a list of 4425 members of Jat community from 455 Jat Gotras and about 280 villages of tahsils Malpura, Tonk, Todaraisingh and Niwai in Tonk district. The 210 gotra names are new gotras not yet recorded in Jatland Wiki with any information about them. These new gotras are written with hindi name in bracket. This list has contribution of members from Jaipur district also. This list has also mentioned Jat Gotras of the contributors and as such is a useful document for the study and distribution of Jat gotras in Tonk district as highlighted below.

Biggest 20 Jat Gotras: The biggest Jat Gotras in the district are as under in the decreasing order with number of members out 4425 as under: