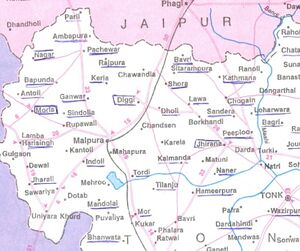 Location of Malpura in Tonk district

Janakipura (जानकीपुरा) is a village in Malpura tahsil in Tonk district in Rajasthan. Village came in news for recovery of gold coins of Gupta and Kushan periods from the village.

Pincode of the village is 304502. It is situated 17km away from Malpura town and 42km away from Tonk city. Kadila is the gram panchayat of Jankipura village. Gurudayalpura, Kerwaliya and Tilajoo are some of the nearby villages.

Police have recovered 195 gold coins dug from Tonk district in the last three months. They have now constituted a special team to work on tip-offs given by villagers. Police had started a search operation from December 5 last year when they got the evidence that a large number of gold coins were dug by villagers from Dabadiya nullah site of Jankipura village of Malpura block of Tonk district. Later, it was confirmed that these coins are of Gupta dynasty and of great historical importance. [1]

The gold rush in Jankipura started in August last year but the district administration took it as a rumour and no action was taken. But in the first week of December, police got the evidence that gold coins from the site were dug up by hundreds of residents from nearby villages and they imposed Section 144 of CRPC and deputed security guards at the site. Till January 7, police had recovered 79 gold coins. 116 coins more coins have been found till date. "There are tips-offs of more gold coins being in possession of villagers in the region and that most of them had sold them," said a source.[2]

The state ASI has prepared a report according to which 106 coins belong to three Gupta emperors: Samudragupta (335-380 AD), Chandragupta II (380-415 AD) and Kumaragupta (515-455 AD), while two more coins of Kushan dynasty. The mystery over the excavation of gold coins at Janakipura has become deeper with the recovery of two coins and a terracota bull dating back to Kushan dynasty and first century AD.[3]