Samudragupta (समुद्रगुप्त) (335 - 380 AD) was ruler of Gupta Empire and successor of Chandragupta. Chandragupta died in 335 and was succeeded by his son Samudragupta, a tireless conqueror.

Samudragupta took the kingdoms of Ahichchhatra and Padmavati early in his reign. He then took the Kingdom of Kota and attacked the tribes in Malavas, the Yaudheyas, the Arjunayanas, the Madras and the Abhiras. By his death in 380, he had incorporated over twenty kingdoms into his realm, his rule extended from the Himalayas to the river Narmada and from the Brahmaputra to the Yamuna. He gave himself the titles King of Kings and World Monarch. He performed Ashwamedha yajna (horse sacrifice) to underline the importance of his conquest. Samudragupta is considered to be one of the greatest military geniuses that India ever produced, thus also known as the 'Napoleon of India'. His name is taken to be a title acquired by his conquests (Samudra referring to the `oceans'). Samudragupta is believed to have been his father's chosen successor even though he had several older brothers. It is therefore believed that after the death of Chandragupta I, there was a struggle for succession in which Samudragupta prevailed.

Samduragupta was not only a warrior but also a great patron of art and literature. The important scholars present in his court were Harishena, Vasubandhu and Asanga. He was a poet and musician himself. He was a firm believer in Hinduism and is known to have worshipped Lord Vishnu. He was considerate of other religions and allowed Sri Lanka's Buddhist king to build a monastery at Bodh Gaya.

The main source of Samudragupta's history is an inscription engraved on one of the stone pillars set up by Ashoka in Kausambi (present day Allahabad). In this inscription Samudragupta details his conquests. This inscription is also important because of the political geography of India that it indicates by naming the different kings and peoples who populated India in the first half of the fourth century AD The inscription or more aptly the eulogy to the Great Gupta's martial exploits states that its author is Harishena, who was an important poet of Samudragupta's court.

The beginning of Samudragupta's reign was marked by the defeat of his immediate neighbours, Achyuta, ruler of Ahichchhatra and Nagasena. Following this Samudragupta began a campaign against the kingdoms to the south. This southern campaign took him south along the Bay of Bengal. He passed through the forest tracts of Madhya Pradesh, crossed the Orissa coast, marched through Ganjam, Vishakapatnam, Godavari, Krishna and Nellore districts and may have reached as far as Kancheepuram. Here however he did not attempt to maintain direct control. After capturing his enemies he reinstated them as tributary kings. This act prevented the Gupta Empire from attaining the almost immediate demise of the Maurya empire of Ashoka and is a testament to his abilities as a statesman. The details of Samudragupta's campaigns are too numerous to recount here. These can be found in the first reference below. However it is clear that he possessed a powerful navy in addition to his army. In addition to tributary kingdoms, many other rulers of foreign states like the Saka and Kushana kings accepted the suzerainty of Samudragupta and offered him their services.

Much is known about Samudragupta through coins issued by him. These were of eight different types and all made of pure gold. His conquests brought him the gold and also the coin-making expertise from his acquaintance with the Kushana. Samudragupta is also known to have been a man of culture. He was a patron of learning, a celebrated poet and a musician. Several coins depict him playing on the Indian lyre or Veena. He also restored the old Hindu practice of the Ashwamedha sacrifice. Though he favoured the Hindu religion like the other Gupta kings, he was reputed to possess a tolerant spirit vis-a-vis other religions. A clear illustration of this is the permission granted by him to the king of Ceylon to build a monastery for Buddhist pilgrims in Bodh Gaya.

Beyond doubt Samudragupta was a great military general, but apart from that, his personal accomplishments are equally remarkable. He showed great magnanimity towards all those kings who were defeated. His polished intelligence and good knowledge of scriptures won him many admirers. He gathered a galaxy of poets and scholars and took effective actions to foster and propagate religious, artistic and literary aspects of Indian culture. He had good proficiency in music and was perhaps an accomplished Veena player. This fact is amply demonstrated in his lyrist type coins. Most king took pride in trumpeting their bravery but Samudragupta is the only king in whole of Indian history who showed softer side of his personality (Kumargupta, his grandson, have copied this type and minted few Lyrist type gold coins, which are exceedingly rare). These coins are very special and rare.

Vincent Smith has elevated Samudragupta in Indian history as the Napoleon of India. His tradition of (Milito) religious toleration reflects in the Allahabad inscription and speaks thus " put to Shama the preceptor of the lord of the gods. Brahaspati by his sharp and polished intellect and Tamburu and Narad by lovely performance." Samudragupta had several sons. His rule is presumed to have been till about 375 AD.

Samudragupta probably died in AD 380, and was succeeded by his sons Ramagupta and Chandragupta.

Ram Sarup Joon[1] writes that ....Samudra Gupta conquered the whole of Punjab and a major part of India. The clans defeated by him included

Samudra Gupta also subjugated the powerful Shaka and Kushana dynasties. In keeping with ancient traditions he performed Asvamedh Yagya (Horse sacrifice ceremony). He was not only an eminent soldier but also a poet and musician of omen calibre. Inspite of being a Jat he has not been maligned by Brahmin historians of Rajput era. He died in 365 A.D. [? The date of his death is accepted by all historians as 375 A.D.]

(The rest of the inscription is entirely broken away and lost.) 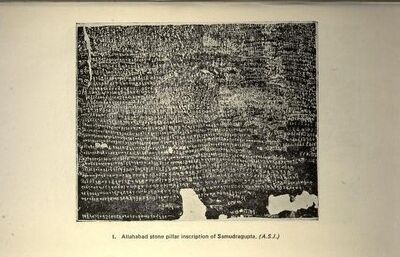 Ashoka Pillar: The 10.6 metre high, polished sandstone shaft dates from 232 BC and was found lying on the ground in the fort in 1837 and set up at its present location. Inscribed on the column are Ashoka's edicts and a later inscription eulogising the victories of Samudragupta (335-375 AD). This is the first record of the events in this Gupta ruler's life.

A detailed record of the reign of Samudragupta is preserved in the shape of an inscription--a prasasti, or panegyric, composed by the poet Harisena and engraved on the same pillar on which Emperor Asoka, centuries before, had had an edict carved. The two inscriptions make a contrasting reading: Asoka's, written in simple Pali, speaks of peace and righteousness; Samudragupta's, written in elegant and classical Sanskrit, glorifies war.

But for the Allahabad prasasti of Samudragupta, we would not have known the political conditions prevalent at that time. This inscription gives an exhaustive account of political career of Samudragupta and the kingdoms conquered by him. Inscriptions also give glimpses regarding the social conditions of the ages to which they belong.

Text of Allahabad pillar inscription of Samudragupta in English

There is another undated Pillar Inscription of the time of Samudragupta got engraved by a feudatory on a rectangular stone pillar found in the ruins of a temple at Eran village of sagar district in madhya Pradesha. Apart from recording the building of a temple there the inscription contains a short euology of samudragupta ina partly damaged form.