Dhaliwal (धालीवाल) (ਧਾਲੀਵਾਲ) (ڈھالیوال) [1] or Dhariwal (धारीवाल) (ਧਾਰੀਵਾਲ) (دهارِيوال‎)[2] is a Clan in the Jats mostly of the Jat Sikh(Jatt) found in the Punjab region of India and Pakistan.They are found in the Indian states of Punjab, Haryana, Rajasthan, Uttar Pradesh, Uttarakhand and Delhi-NCR.

Dhaliwals are said to be Gotra of rulers of Gupta Empire. This has been proved by studying the historical Plates of Poona that Guptas were Dharans or Dhaliwals. A study is going on to check the Bhatti lineage of Dhaliwals.

Some other sources suggest about how "Dhaliwal" word got existence. According to those, there was a Jat tribe who used to rear white cows in abundance which was locally called as Dhaul. Earlier they were called Dhaulpal or the one who rear white cows aka Dhaul. With the passage of time and changing of dialects, Dhaulpal word modified to Dhaliwal. 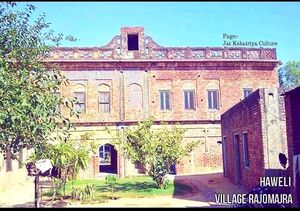 Dhaliwal Jats are said to be descended from Gupta Empire.They are said to be descendants of a Bhatti Jats. Some sources suggest that they are from Dholpur. The name changed to Dhaliwal in Malwa and Dhariwal in Majha. Dhaliwal people settled in Jodhpur and Bangar of Rajasthan Ghaggar banks which were inhabited by a slim section called Pachahda who were often clashing with Dandwalis and Gills and some times went ahead to disturb the Chahals of Khiala village. Once, the Pachahda attack got really intense and the Chahals went to their maternal grandfather Sidh Dhaliwal in Bangar. They came back with his hordes and met Pachahdas near Sardulgarh. The Pachahda chief Baba Dalla was slained in the ensuing battle. Baba Sidh’s army also suffered heavily and Pachahdas kept following his army. At last Baba Sidh was also slained near village Bhama.

Dhaliwal community settled in the area of Jhunir for the first time either at the end of 11th century or beginning of 12th century. There are many Dhaliwal villages around Jhunir. Dandiwals fought against them and forced them to retract towards Kangar. Dhaliwals defeated Cheemas and captured Kangar. They built a fort at Kangar and moved toward Moga, Punjab. At Dina which is 2 km at North of Kangar was visted by the Tenth Sikh Guru , Sri Guru Gobind Singh Ji and here Guruji wrote the famous 'zafarnama' to the Mughal Emperor Aurangzeb. 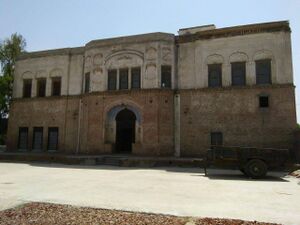 H.A. Rose[3] mentions that Dhariwal, Dhāriwāl, Dhaniwāl or Dhāliwāl, (or, in Karnal, Phor) Jats, for the name is spelt in all three ways, are said to be Bhattis, and to take their name from their place of origin Dharanagar.

They are found chiefly on the Upper Sutlej and in the fertile district to the west, their head-quarters being the north-western corner of the Malwa, or Ludhiana, Ferozepur, and the adjoining parts of Patiala.

Mr. Brandreth describes them as splendid cultivators, and the most peaceful and con- tented portion of the population of the tract. Akbar conferred the title of Mian on Mihr Mitha and gave him 120 villages around Dhaula and Kangar in jagir.

The Dhaliwals have undoubtedly been settled in that part from an early period, and the south-east angle of the Moga tehsil is still called the Dhaliwal tappa. Mitha's descendants are still called Mian, but they are said not to have been converted to Islam though for several generations their leaders bore distinctly Muhammadan names. However this may be Mihr Mitha is now their sidh with a shrine at Lallawala in Patiala, and on the 2nd sudi of each month sweetened- bread and milk are offered to it. In Sialkot, however, their sidh is called Bhoi and his seat is said to be at Janer Fatta.

The Dhaliwals are divided into two groups, Udhi or Odi and Moni or Muni (who alone are said to be followers of Mihr Mitha in Gujranwala) .

Dhaliwal people are brave, knowledgeful and big hearted among Jats. There are lots of examples of scholars, spritiual leaders, saints and warriors in this Gotra.

Bhagat Dhanna was a devotee and a Gurmukh, born in village of Dhuan Kalan in 1415, on April 20th near Deoli city, in the Tonk district, Rajasthan, present day North West India. His Bani is included in the Sri Guru Granth Sahib Ji.

Though born in a Jat Hindu family of the Dhaliwal Clan, he rejected all Hindu traditions and rituals when he came in contact with Gurmukhs. He found God from his heart. He choose to control his desires and to have the only one desire for God. He was a farmer by profession. The 5th Nanak said Bhagat Dhanna Ji served the Lord, with the innocence of a child. He followed commands of the Lord after realising the true way of the Lord.

During the reign of Mughal Emperor Akbar there was a landlord whose name was Chaudhary Mihr Mitha Dhaliwal. He had a beautiful and young daughter Dharam Kaur to whom Akbar wanted to marry. Akbar sent a marriage proposal to Chaudhary Mehar Mithe in which he mentioned that if Ch. Mihr Mitha gave his daughter to Akbar then he would be rewarded with Jagirs. Chaudhary Mehar Mithe organised Khap meeting to discuss this issue and all the members of Khap Panchayat decided that they would not give their to daughter to a non-Jat man. This shows how rooted Dhaliwals are to their ethics and culture.

Dhaliwal named Village is in Batala tahsil in Gurdaspur district in Punjab.

The population of Dhaliwal in Patiala district is 54,000. It appears that this clan has settled in this area around 12th or 13th century A.D. from Jaisalmer. Dhaliwals are mainly to be found in the sub-districts of Bhatinda and Bhikhi and their important septs are Mani, Rureka, Ramana, Udi, and Dina.[5]

Dhaliwal have a population 32,454 in Ludhiana district. This clan holds many villages around the towns of Pakhowal and Jagraon. Their ancestors moved from Jaisalmer, Rajasthan province to the south of modern Punjab.[6]

Dhaliwal is village in tahsil Samrala of district Ludhiana

The Dhaliwal or Dhariwal are a major Jat clan in Mandi Bahauddin district. They are also found in Gujranwala, Sialkot, Lahore and Narowal. Prior to partition, a good many were also found in Hoshiarpur, Gurdaspur and Amritsar.

There are many well known people with this surname: