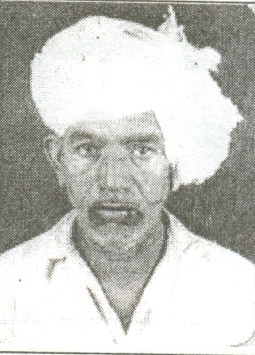 Mangal Sen Jindal writes:[1] "The first Bands of Jats, at least, respected my Kha Khan's commission when I offered no resistance and insisted that I was defending one of Tugluk's cities against Tatar attackers." Conquests of Tamerlane, page 104.

"Timur, my son, prince of Samarkand, the Kha-Khan droned. You have served me well and brought rich gifts. You stand high in my favour. And we continued our formal conversation for an hour. Tugluk reminded me again that I was of the house of Kayouli and my duty was to protect his son, of the house of Kabul. We reviewed the fine service I had rendered and vowed eternal friendship and loyalty. But when the Kha-Khan left, I found that the Jat General Bikijuk was the new protector and I was left with Shehri-Sebz, a steel tablet, and whatever army I could raise and support. But I still had my valley, Trampled and devastated though it might be." Conquests of Tamerlane, page 106.

"Bikijuk pillaged, ravaged and raped from the very start. Whether the tribal chieftains paid tribute or not, the Jat protector came and took all. During the king maker's life time the protectorship had been a two way arrangement- protection of and against the puppet of Samarkand. Under Bikijuk there was no protection against the spoiled prince." Conquests of Tamerlane, page 107.

"The crimes now are against Allah. The Jats have robbed mosques and defiled the green turbans of Sayyids, Said Zain- ad-din, Allah's wrath is aroused. You are His servant. You must rise against Bikijuk." Conquests of Tamerlane, page 107.

"Zain-ad-din and his corps of priests had put everyone of my warriors on edge-I was all Good, Bikijuk all Evil-so I led three thousand madmen north. I led them madly on beyond Samerkand under the cover of night. I bad learned of the Jat strongholds at Tashkand and Otrar where captives were

History of Origin of Some Clans in India:End of p.50

held. It was toward these that I headed my crusade for Allah." Conquests of Tamerlane, page 108.

"Otrar fell to our holy Zeal. Again following the lead of our God who had taken our enemy chief, we slew all the Jats and set free our own people. And we paused to give thanks. For a week we celebrated inside the walls of Otrar. We refitted our men with the loot of the Jats-new clothing, new weapons, new mounts and new spirit. Then we crossed the Syr-Darya toward the Kirghis Steppe, where Mongol nomads held more of our people. We made quick work of the dull, stupid wanderers and then turned east and met the Samar-Kand corps, reinforced by Tugluk's army, We met in the late afternoon with the sun our backs. As a beheld the drab garb and the awkward big wheeled Kankalis of the northerners, I took pride in the colourful force Allah had given me. I was sure that the Mangols were amazed in their sleepy eyed way at the splendid warriors they faced-the heavenly host of Allah's own guard. We drew up in a line and camped for the night, eager to dazzle and defeat the hateful Jats in the next bright sun rise.... All night and all day it rained. Another day and another night and the slow-moving Jats drew up in a battle line. From the combersome Kankalis, high above the mud on their eight-foot wheels, the Mangols had taken dry horse blankets, dry weapons and shovels with which to derain their camp grounds so they faced us in comfort and superior strength." Conquests of Tamerlane, page 108.

Khakhan is a village in Ganganagar district with PIN:335901