Location of Mandalgarh in Bhilwara district

Mandalgarh (माण्डलगढ़) is a city and a municipality in Bhilwara district in the Indian state of Rajasthan.

It is a place of considerable historical significance. Its ancient name was Mandalakrita (मण्डलकृत).

Other source tells us that it gets name from Manda Rao (माण्डा राव), the ancestor of Bagarawats. [1]

It was probably founded by Manda gotra Jats.

Dasharatha Sharma[2] writes....[p.123]: Hammira was the last and most famous of the Chauhans of Ranthambhor. Hammira had ascended the throne in V.1339. Not very long after this, he started, according to the Hammiramahakavya, on a digvijaya or conquest of all the quarters. He first defeated Ajuna, the ruler of Bhamarasa, and then exacted tribute from the fort of Mandalakrita (मण्डलकृत) or Mandalgarh. Striking southwards from here, he reached Ujjayini and Dhara and defeated the Paramara ruler Bhoja. From here he turned northwards, and reached home passing through Chittor, Abu, Vardhanapura (वर्धनपुर) (Badnore), Changa (चंगा) (fortress of the mers still retains old name), Pushkar, Maharashtra (Marot), Sakambhari, Khandilla (खंडिल्ल) (Khandela), Champa (चम्पा) (Chaksu), and Karkarala (कर्कराला) (Karkaralagiri of the Balvan Inscription == Karauli), at the last of which places he received the homage of the ruler of Tribhuvanagiri (Tahangarh).

[p.124]: after came a Koti-yajna which was very much like the asvamedha of Samudragupta. It was under the direction of his purohita Vishvarupa. This digvijaya, or rather a number of raids from time to time magnified into one systematic digvijaya (Balvan Inscription, EI, XIX, pp.49 ff) by Nayachandra, took place before V. 1345 (c. 1288 A.D.). The Balvan inscription of the year mentions the performance of not only one but two Kotiyagna by Hammira and describes the capture of the elephant force of Arjuna, the ruler of Malwa, a kingdom the condition of which was indeed bad enough to invite interference from all sides. 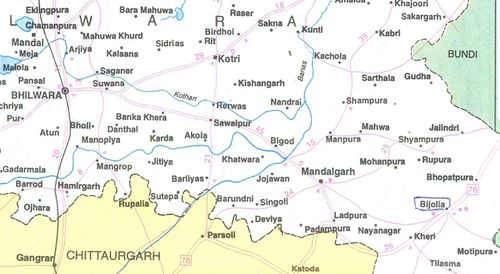 Location of Places around Mandalgarh

It has a fort which is of significant historic importance. One of the prime attractions of Bhilwara in Rajasthan is the Mandalgarh Fort Bhilwara. One of the most beautiful Forts and Palaces in Rajasthan, Mandalgarh is worth a visit while on tour to Rajasthan.

A prominent trading center of Mewar, Bhilwara is a mid station of Ajmer - Chittor rail line and is located on Nh-4 Highway between the Banas and Kothari rivers. Bundi lies to the east of Bhilwara, Rajasmand on the west, Ajmer to the north and Chittorgarh to the south.

A town in the Mewar region of Rajasthn state in India, Bhilwara lies about 600 km from Delhi - India's capital city. History has it that Bhilwara town was established sometime in the middle of the 11th century, when when a Bhil tribal built a Shiva Temple at the site of the existing Jataun ka Mandir. Bhilwara got its name from the fact that the town was mostly inhabited by Bhils in earlier times.

The Land of Courage and Sacrifice, Bhilwara boasts of significant historical importance, because it was the site of many a fierce battle fought during the medieval times. Bhilwara got destroyed several times before it flourished in the 18th century. Built by Rana Kumbha, Mandalgarh Fort Bhilwara is the 3rd fort of Mewar region, the other two being Chittoragrh and Kumbhalgarh.

In 1858, a fierce battle was fought at the Sanagner village in Bhilwara, between renowned revolutionist Tantya Tope and the British. Thereafter, Bhilwara got connected through railway line and the town started to flourish.

Mandalgarh Fort in Bhilwara Rajasthan is a fort of considerable historic significance. Located about 52 km from Bhilwara in Mandalgarh, the Mandalgarh Fort Bhilwara can be reached by taking a diversion between Menal and Bijolia. The fort is about 1 km long and set at a height of 1850 feet above sea level.

Mandalgarh Fort Bhilwara is believed to have been built by Rana Kumbha. The fort features a low rampart wall and bastions surrounding the crest of the hill on which the fort stands. There is an ancient temple within the fort called Jaleshwar. Mandalgarh Fort in Rajasthan India also houses a Shiva temple, besides some other divine temples.

How to Reach Mandalgarh Fort Bhilwara

By Rail - A meter gauge railway line connecting Ajmer and Khandwa passes through the Bhilwara District of Rajasthan. A broad gauge line has also been laid from Kota to Chittorgarh, and this line passes through Bhilwara at Mandalgarh.

By Road - Located near the National Highway that connects the cities of Jaipur and Udaipur, Mandalgarh Fort is easily accessible by road from major destinations within Rajasthan state.