Note - Please click → Mandawar for details of similarly named villages at other places.

Location of Mandawar in Alwar District

Mandawar (मुण्डावर) is a village and tahsil in Alwar district in Rajasthan. 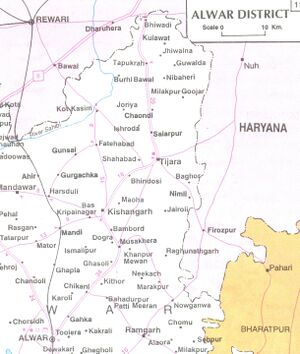 Location of villages around Mandawar

Prithviraja III's kaka Kanhadadeva was a great warrior. He had 18 sons. His descendants are in large number. He was known as Kaka Kanha and present Alwar district's northern part, Sambhal and Moradabad were in his Jagir. Kaka Kanha's son Bhimadeva got Isagarh, Mathin in Jagir. Bhimadeva had four sons, out of them eldest was Lakhan Singh. He stayed at Mathin. Mathin was later known as Mandawar. Lakhanasinha's son Haladeva faced Timur's attack on Mandawar in which Haladeva was killed. His son became Muslim and was gifted with Mandawar in Jagir and Rao title. Mandawar's Muslim still use Rao title. [1]