Ghiyasuddin Tughlaq (r.1320-325), or Ghiyas-ud-din Tughlaq (गयासुद्दीन तुगलक) or Ghazi Malik (died c. 1325) was the founder of the Turkic Tughluq Dynasty in India, who reigned over the Sultanate of Delhi from 1320 to 1325. He founded the city of Tughlaqabad. His reign was cut short after 5 years when he died under mysterious circumstances in 1325. He was succeeded by Muhammad bin Tughluq

Ghazi Malik was a feudatory of the Khilji rulers of Delhi, India. Once while on a walk with his Khilji master, Ghazi Malik suggested that the king build a fort on a hillock in the southern portion of Delhi. The king jokingly told Ghazi Malik for building the fort himself when he would become king. 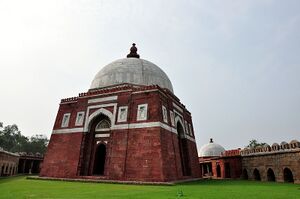 The Tomb of Ghiyasuddin Tughlaq in Delhi

In 1321, Ghazi Malik drove away the Khiljis and assumed the title of Ghias-ud-din Tughlaq, starting the Tughlaq dynasty. He immediately started the construction of his fabled city, which he dreamt of as an impregnable, yet beautiful fort to keep away the Mongol marauders. However, destiny would not be as he would have liked.[1]

Ghias-ud-din is usually perceived as a liberal ruler. However, he was so passionate about his dream fort that he issued a dictate that all labourers in Delhi must work on his fort. Saint Nizamuddin Auliya, a Sufi mystic, got incensed as the work on his baoli (well) was stopped. The confrontation between the Sufi saint and the royal emperor has become a legend in India. The saint uttered a curse which was to resonate throughout history right until today:

This can roughly be translated to "either remain inhabited or would live gujjars". So, after the fall of sultanate, Gujjars of the area captured the Qila and till date, village Tughlakabad is situated in it.[2]

Another of the saint's curses was Hunuz Dilli dur ast (Delhi is still far away). The Emperor was engrossed in a campaign in Bengal at this time. He was successful and was on his way to Delhi, he conquered Tirhut (north Bihar). At Afghanpur in February 1325, the wooden pavilion used for his reception collapsed, killing him and his second son Prince Mahmud Khan. Ibn Battuta claimed it was a conspiracy, hatched by his heir apparent, Jauna Khan.

After his death, his eldest son, Muhammad Tughlak took over the reigns of Tughluq Dynasty.