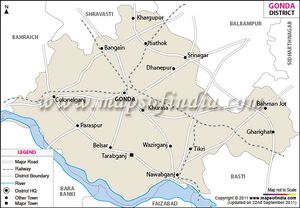 Gonda is a City and districts in Uttar Pradesh, India.

The territory covered by the present district of Gonda formed part of the ancient Kosala Kingdom. After the death of Rama, the celebrated sovereign of the Solar line who ruled Kosala, the kingdom was divided into two portions defined by the Ghaghara river. The northern portion was then ruled by his son, Lava with the city of Sravasti as his capital.[2] Sravasti was prosperous and progressive during Buddha's time, and he made twenty one visits to the city during his Mahaparinirvana.

More recently, ancient Buddhist remains dating to the early days of Buddhism have been found throughout the region, including at Sravasti.[3]