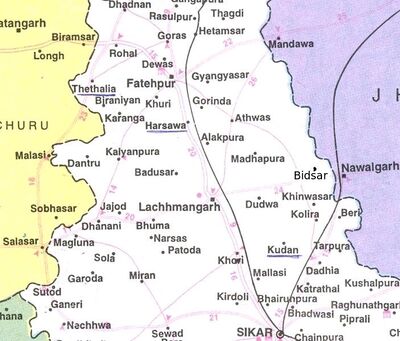 Hari Baba Aashram (हरिबाबा आश्रम),Bidsar or Beedsar is a religious place for the devotees of Saint Shree Hari Baba. It is situated in Sikar district of Rajasthan. Hari Baba Aashram (हरिबाबा आश्रम) attracts thousands of Rajasthani worshipers throughout the year. On Chaitra Purnima large Jagaran are organized every year where more than 2 to 3 thousands of people assemble here to pay their homage to the deity. Hari Baba Aashram Samiti looks after the management of the Aashram and the fairs. The Aashram of Sri Hari Baba is situated right in the north of the Bidsar Village.

Bidsar is a part of district Sikar in Rajasthan and it is situated on the Nawalgarh to - Laxmangarh Road in Bidsar (Chatrana Johra). It is at a distance of 35 kilometers from Sikar, 8 kilometers from Nawalgarh and 22 kilometers from Laxmangarh. Bidsar lies under the jurisdiction of the Bidasar Panchayat Samiti and is connected with Sikar by regular bus service run by the Rajasthan State Road Transport Corporation. Indian Airlines and Jet Air fly to Jaipur, from where Bidsar is 3.3 hours drive via a taxi or a bus.