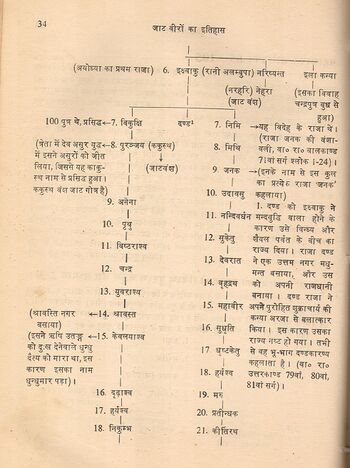 Ikshvaku (Sanskrit: इक्ष्वाकु) was the first king of the Ikshvaku dynasty and founder of the Ikshvaku-Vansh, or Suryavansh Dynasty of Kshatriyas in Vedic civilization in ancient India.

Ikshavaku (इक्ष्वाकु ) is a term mentioned by Panini in Ashtadhyayi. [1]

Ram Sarup Joon[2] writes that...When Aryans came to India They called themselves the descendants of Manu and remembered the tragedy of the flood. They came to India in two groups. Their strength cannot be ascertained. One of those advanced straight through the northern plains and founded the town of Ayodhya. The leader of this group was Ikshwaku, who had eight brothers and one sister named Ahalya (or Ela). On arrival at Ayodhya this group clashed with the original inhabitants and drove them down South. The other group settled down on the banks of River Ganga in the area around Haridwar, and stayed there for many generations. The leader of this group was Buddha (not to be confused with Buddha who founded Buddhist Religion). Buddha married Ikshvaku’s sister Ahalya. In his Dynasty were Pandwa etc (not of Mahabharat age/epic). His son was Nahak and his son Yayati, father of Jats.

Historians of the Rajput period have called the Ikshwaku group as Surya Vanshi and the Buddha group as Chandra Vanshi, corresponding to the Sun and Moon. Their origin has been linked with Brahma the creator of the universe. The following genealogical tree was drawn out.

The names included in this table, above Ikshwaku and Buddha are just synonyms of the Sun, Moon and Planets.