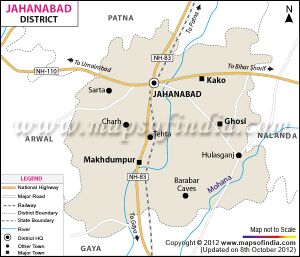 Jahanabad (जहानाबाद) is a city and districts of Bihar state, India.

Jehanabad district is a part of Magadh Division. This district is 45 km from Patna, the capital of Bihar and 43 km from Gaya. Jehanabad is located on the confluence of two small rivers called Dardha and Yamunaiya.

Jehanabad is named after Jahanara Begum Sahib. She was daughter of Mughal emperor Shah Jahan and Arjumand Banu Begum. She was born on 16 September 1681.

The famous Barabar Caves are located in the Jehanabad District. They are the oldest surviving rock-cut caves in India, mostly dating from the Mauryan period (322–185 BCE), and some with Ashokan inscriptions.