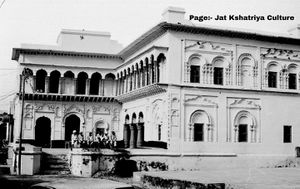 Kirmara (किरमारा) is a village in Agroha Block of Hisar tehsil and district of Haryana.

The village of Kirmara, Hissar, Haryana was established by two Panwar Jats named as Aadu (आदु) and Dharja (धरजा). They are said to be uncle and nephew in relation. [1]

It is located 28 KM towards North from the District head-quarters Hisar, 10 KM from Agroha and 212 KM from State capital Chandigarh and about 183 KM from Delhi. Postal code of Kirmara is 125047 and Telphonic code is 01669.

Kirmara village has very long history of evolution of generation by generation. Village is very old in Haryana state and has its roots since pre-independence time. Old people say the village is established by two great person named as Aadu (आदु)and Dharja(धरजा) They are uncle and nephew in relation. They were clan of Panwar gotra.