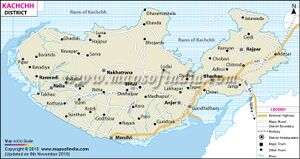 Lakhpat is a town in Lakhpat tahsil in Kachchh district in Gujarat.

Lakhpat is the last town situated at the western end of India, on the India-Pakistan border, at the junction of Kori Creek and Rann of Kutch.[1]

It was founded by Rao Lakha, so it is named Lakhpat, who ruled in Sindh about the middle of the thirteenth century.[2] [3]

Hukum Singh Panwar[4] (Pauria) quotes D.C. Ganguli[5] who refers to modern Kutch as the Jartradesa of tenth century A.D. with her Kings Phula and his son, Laksha or Lakha.

Lakhpat town probably derives its name from its founder Rao Lakha, so it is named Lakhpat. Lakhpat is fortified town with high walls, several gates and bastions made out of hard stone. After a short period of prosperity, Lakhpat lost is maritime significance in 1851 AD, when the Sindhu river changed its course. Once a thriving town with population of 15,000 is today a deserted town with only few families living here.[6]

Historically Lakhpat has been very important trading post connecting Gujarat to Sindh. The waters of Sindhu river used to flow into Lakhpat and further onto Desalpar Gunthli. Within historic times Lakhpat has had only one very short period of prosperity. Rice used to be cultivated and Lakhpat used to give an annual revenue of 800,000 Koris just from rice. It is also said that Lakhpat used to generate an income of 100,000 Koris everyday from maritime activities.

Another legend says that the prosperous maritime trade which generated a daily income of one Lakh (1,00,000) Kori, an old currency of Kutch State. [7]

The interesting structures at Lakhpat are teh tomb of Gosh Muhammad and Sikh Gurudwara. Gosh Muhammad was a famous saint revered equally by Hindus and Muslims. A beautiful tomb was constructed using local hard black stone, after his death in 1855 AD. It is an octagonal, domed structure with four entrances. The corner pilasters, foliated arches on each side, door jams and niches are exquisitely carved using floral mortifs and the tree of life. Inner walls are decorated with verses from the Koran using beautiful calligraphy.[8]

It is one of teh sacred places associated with life of Guru Nanak Sahib, the founder of the Sikh religion, as it is believed that he embarked for Haj to Mecca from Lakhpat. The gurudwara here was constructed to commemorate this event, and it is visited by Sikhs throughout the year. Other interesting structure at Lakhpat are: the mosque, a structure for keeping ajia (a Muslim religious float) and number of Hindu temples.[9]