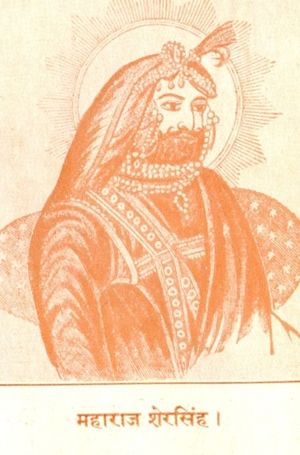 Maharaja Sher Singh (December 1807 - r.20.1.1941-16.9.1843) was a Sikh ruler of the sovereign country of Punjab and the Sikh Empire. He was the son of Maharaja Ranjit Singh and Queen Rani Mehtab Kaur (not to be confused with Maharani Mahtab Devi Sahiba, d/o Maharaja Sansar Chand of Kangra, another wife of Maharaja Ranjit Singh) who was also the mother of Prince Tara Singh (1807-1859). He became Maharaja on January 20, 1841, after the sudden death of Nau Nihal Singh whose death was set in motion, some say purposely, while returning from his father's cremation. He was the half brother of Nau Nihal Singh's father, Maharaja Kharhak Singh.

Proclaimed Maharaja by his Vizier (pronounced wazir, his prime minister), he won the throne after a protracted siege of the Lahore Fort which was held by the Royal family. Thousands died in the siege. Historians record that he was not very smart politically and let the Dogra brothers take charge of all functions of state. The Dogra brothers, like puppet masters, pulled the strings of others to bring about the death of Sher Singh. Sher Singh was killed as he reached for a new shotgun held by Ajit Singh Sandhawalia his cousin, who pulled the trigger. Sher Singh only had time to utter, "what treachery." The Sandhawalias also murdered Wazir Dhian Singh Dogra. The Sandhawalias were thought to have also had designs on the empire.

Maharaja Ranjit Singh had three other sons Maharaja Kharak Singh, Prince Pashaura Singh and Prince Tara Singh. (Prince Tara Singh born of same mother as Sher Singh - Rani Mehtab Kaur). Prince Peshaura Singh had rebelled and had taken Attock under the instructions of the Dogra brothers. Prime minister Jawahar Singh (Rani Jind Kaur's brother) rushed forces to Attock to stop the rebellion and in the process Prince Peshaura Singh was killed. The Sikh Khalsa army, in revenge for the killing of the rebelling prince, killed Duleep Singh's maternal uncle Prime minister Jawahar Singh in front of her and Duleep Singh as punishment at Lahore on September 21, 1845.