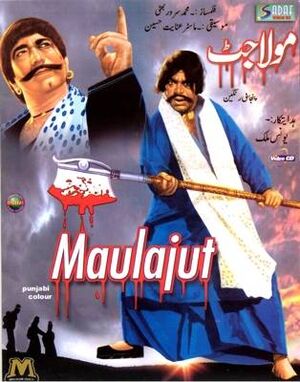 Maula Jatt (Punjabi: مولا جٹ) is one of the most popular films in the history Pakistani cinema. It is a Punjabi film starring legendary actor Sultan Rahi in the lead role and with Aseia and Mustafa Qureshi as the villain Noori Nuth.The story mostly revolves around the clashes between Maula Jat (The Hero) and Nuri Nath (The Villain).

Maula Jutt was a classic, a film that scored heavily and reached cult status both in Pakistan & India. Such was the impact of the film that it was copied by film makers in India and also in Pakistan where several films with the sufix "Jatt" was used. However, no copy of this film could ever hope to match the outstanding dialogues in the film and the chemistry between Sultan Rahi and Mustafa Qureshi.

This film became a rage in the 80's and spawned a number of sequels, becoming the first ever successful unofficial franchise for a Lollywood title. Maula Jat's enormous success spawned Maula Jat tey Noorie Nut as well as Maula Jat in London and continues to influence popular culture even in 2002 with plays like Jatt and Bond hitting the scene which uses Maula Jat as their"inspiration".

It's a fascinating blend of the usual twisted Lollywood formula, but done with tremendous rustic panache and style. The characters, as with all Punjabi films are much, much larger than life - part of the "charm" of the film. The plot has nothing new to offer and begins with the absolutely mandatory attempted rape scene which is aborted due to the timely intervention of Maula Jat, Lollywood's version of Superman.

General Zia's military government of the day tried to get the film stopped weeks after its release but Sarwar Bhatti managed to get a stay order which allowed the film to remain in cinemas for a two year period. The film did roaring business for the two years and was set to continue its record busting run but the Generals jumped on their chance on the lapse of the stay order and the film was removed from screens and banned from further exhibition. The film was also responsible for the government hurrying in a new code for filmmakers which prohibited them from portraying the establishment in too harsh a light. Maula Jats two and a half year run remains the record for any Punjabi film and the movie could well have gone on to challenge Aina for the longest running Lollywood film ever had the government not forced it off screens.