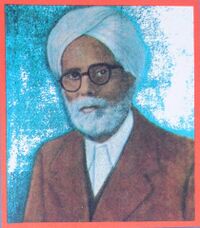 Sardar Ajit Singh Sandhu (2 February 1881-15 August 1947) was born at village Khatkar Kalan district Jalandhar in in a military family from Punjab in India.

He was the man in the Punjab who resented the high-handedness of the British rule and openly criticized the British government. He was declared a political rebel and had to spend many years of his life in jails or in exile from India.

He was born at Khatkarkalan village in Nawanshahr District.[1]

He studied at D.A.V. College, Lahore and later on Law College, Barreily.He plunged into the freedom movement and left his law studies. In 1907, he was deported to Mandalay Jail in Burma along with Lala Lajpat Rai. After his release, he escaped to Iran. From there, he traveled to Rome, Geneva, Paris, and Rio de Janeiro.

In 1918, he came in close contact with the Ghadar Party in San Francisco. In 1939, he returned to Europe and later on helped Netaji Subhas Chandra Bose in his mission in Italy. In 1946, he came back to India at the invitation of Pandit Jawahar Lal Nehru. After spending some time in Delhi, he went to Dalhousie.

He breathed his last on August 15, 1947, after India got its Independence. His last words were, "Thank God, my mission is fulfilled."

A samadhi in his memory is at Panjpula, a popular and scenic picnic spot in Dalhousie.