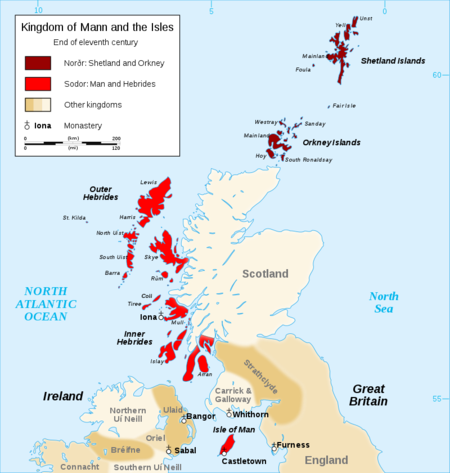 Shetland is around 170 kilometres north of mainland Scotland. The islands lie some 80 km to the northeast of Orkney, 168 km from the Scottish mainland and 280 km southeast of the Faroe Islands. They form part of the division between the Atlantic Ocean to the west and the North Sea to the east.

In AD 43 and 77 the Roman authors Pomponius Mela and Pliny the Elder referred to the seven islands they respectively called Haemodae and Acmodae, both of which are assumed to be Shetland. Another possible early written reference to the islands is Tacitus' report in Agricola in AD 98, after describing the discovery and conquest of Orkney, that the Roman fleet had seen "Thule, too". In early Irish literature, Shetland is referred to as Insi Catt—"the Isles of Cats", which may have been the pre-Norse inhabitants' name for the islands. The Cat tribe also occupied parts of the northern Scottish mainland and their name can be found in Caithness, and in the Gaelic name for Sutherland (Cataibh, meaning "among the Cats").[3]

The oldest version of the modern name Shetland is Hetlandensis, the Latinised adjectival form of the Old Norse name recorded in a letter from Harald, Count of Shetland in 1190,[4] becoming Hetland in 1431 after various intermediate transformations. It is possible that the Pictish "cat" sound forms part of this Norse name. It then became Hjaltland in the 16th century.[5][6]

As Norn was gradually replaced by Scots in the form of the Shetland dialect, Hjaltland became Ȝetland. The initial letter is the Middle Scots letter, "yogh", the pronunciation of which is almost identical to the original Norn sound, "/hj/". When the use of the letter yogh was discontinued, it was often replaced by the similar-looking letter z, hence Zetland, the form used in the name of the pre-1975 county council.[7][8]

Most of the individual islands have Norse names, although the derivations of some are obscure and may represent pre-Norse, possibly Pictish or even pre-Celtic names or elements.[9]

Humans have lived in Shetland since the Mesolithic period. The earliest written references to the islands date to Roman times. The early historic period was dominated by Scandinavian influences, especially from Norway, and the islands did not become part of Scotland until the 15th century. When Scotland became part of the Kingdom of Great Britain in 1707, trade with northern Europe decreased. Fishing has continued to be an important aspect of the economy up to the present day. The discovery of North Sea oil in the 1970s significantly boosted Shetland's economy, employment and public sector revenues.

The local way of life reflects the Scottish and Norse heritage of the isles, including the Up Helly Aa fire festival, and a strong musical tradition, especially the traditional fiddle style. The islands have produced a variety of writers of prose and poetry, often in the distinct Shetland dialect of Scots. There are numerous areas set aside to protect the local fauna and flora, including a number of important sea bird nesting sites. The Shetland pony and Shetland Sheepdog are two well-known Shetland animal breeds. Other local breeds include the Shetland sheep, cow, goose, and duck. The Shetland pig, or grice, has been extinct since about 1930.

The islands' motto, which appears on the Council's coat of arms, is "Með lögum skal land byggja." This Old Norse phrase is taken from the Danish 1241 Basic Law, Code of Jutland, and is also mentioned in Njáls saga, and means "By law shall land be built".

Alistair Moffat[10] notes...Colder and wetter weather in Shetland, Orkney and Hebrides encouraged the spread of peat and in some places the new field boundaries set up by bronze age farmers were submerged across the span of only a few generations. Upland cultivation gave way to stock-rearing and the population dwindled. Some historians believe that the eruption of Hekla triggered a migration from North Western Scotland to the east but at present there exists no firm DNA evidence to support this. The deferences as detected in the east-west frequencies of the subgroups of R1b appear already to have been establishing themselves.