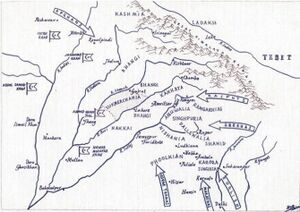 Map of Misls of Sikhs

The Sukarchakia (Sukar Chakian) was one of the Misals in Punjab. It is a clan name of the Sikhs.[1] [2]

This misal derives its name from Sukar Chak Village.

Begha Mal Bhathi belonged to Suker Chak village. He was the founder of this Misal. Afterwards, Budha Singh, Charat Singh, Sardar Maha Singh held the reins of 'Sardari'. The most powerful of the Sukar Chakia Misal was Ranjit Singh of Lahore, son of Maha Singh. He defeated all the Misals and founded the Sikh State with Lahore as its Capital. He was called the 'Lion of the Punjab'. [3]

Budha Singh was the first Sikh who received Pahul from Guru Gobind Singh. Donda Singh was the second brother of Charat Singh, whose heirs were known as Sindhan Wala.