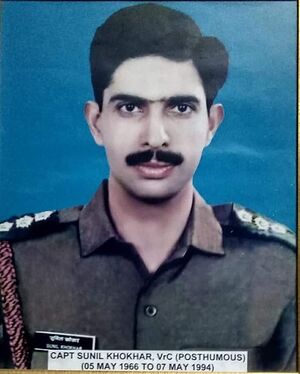 Captain Sunil Khokhar (5.5.1966-7.5.1994) (Vir Chakra) was a second generation soldier. He became martyr on May 7, 1994 in ‘Operation Meghdoot’ at Siachen Glacier. His father Satish Kumar Khokhar served in the Army for 28 years and retired as Honorary Captain.

Sunil was born on May 5, 1966, at Kansala village in Rohtak district of Haryana. He did his schooling from Model School, Rohtak.

After graduating from University College, Rohtak, joined the Officers’ Training Academy in Chennai and was commissioned into the 268 Medium Regiment of Artillery on August 24, 1991.

India and Pakistan have fought intermittently since 1984 at Siachen Glacier, where not a single blade of grass grows, yet it remains the highest battleground on earth. And not without reason, as the strategic importance of the glacier can never be over-emphasised. The Indian Army occupies almost all dominating heights on the Saltoro Ridge, west of Siachen Glacier. To maintain the hold and also to dominate the tactically important features north and west of the ridge, the Indian Army has been launching ‘Operation Meghdoot’ in this region since 1984 at the time and place of its choosing.

Operations in Siachen Glacier are extremely hazardous as the temperature in that unimaginably hostile area falls as low as – 86°C and blizzards swirl up icy 300 kph winds. Due to treacherous terrain and sub-zero temperatures throughout the year, physical patrolling of the areas ahead of the post is neither possible nor viable and artillery fire is the best option to thwart the enemy’s advances. It is for this purpose that an artillery officer always remains deployed on the strategically important posts for registration and engagements of the enemy targets. The artillery officer who mans the Observation Post is deployed for duration not more than 45 days, after which he is relieved by another artillery observer.

Captain Sunil Khokhar, an artillery officer from 268 Medium Regiment, volunteered to man the most challenging and strategically important ‘Pahalwan’ Observation Post in Siachen glacier at a height of 19,805 ft as part of ‘Operation Meghdoot’. After gradual acclimatisation at increasing altitudes, he took over the post. Capt Sunil willingly consented to remain on the post even beyond his scheduled tenure of 45 days till the arrival of his reliever. And, it was during his extended tenure at Siachen Glacier, that Capt Sunil Khokhar went way beyond the call of duty and outperformed himself, an act for which he was awarded the Vir Chakra, posthumously.

Gen Gurdeep Narang, ex-Commanding Officer of 268 Medium Regiment recalls: “Sunil, an outstanding officer in my regiment, had volunteered to man ‘Pahalwan’ Observation Post in Siachen Glacier. The post he held has 45 days tenure. The officer earmarked to relieve him became sick. I spoke to Sunil and asked him if he could continue for another week. He did not hesitate even for a minute and readily agreed. All I could do for him was that I volunteered to go myself up to the post and finish the task he was performing, when he achieved martyrdom. I had to undergo rigorous training as not even an Infantry Commanding Officer had walked up to that post. I did because as his Commanding Officer, I was duty-bound to complete the task he was performing so very bravely and I guess Sunil, too, wanted me”. Some people are like that.

“In the early hours of May 5, 1994, the probing action launched by the enemy resulted in heavy exchange of fire with planned attempt on part of the enemy to capture the strategic 'Pahalwan' post. It also happened to be the 28th birthday of Captain Sunil Khokhar. After blunting the enemy attack, a patrol was launched at 9 pm, which located the enemy camp site. Capt Sunil Khokhar engaged the camp site with artillery fire and inflicted heavy damage on the enemy. On May 7, 1994, Capt Sunil Khokhar was detailed to accompany a subsequent patrol for directing artillery fire on the camp site. The officer took initiative to carry out silent registration of targets before going with the patrol; to bring down artillery fire on the registered target on call at shortest notice. While carrying out his task, apparently, the enemy spotted him and was heavily fired upon. The officer displaying great courage, showing absolute disregard to personal safety and continued to carry out the registration of targets. While he was in the process of registering the remaining two targets, a burst of fire from the enemy caught him on the neck and the gallant officer laid down his life in defence of the motherland. Being an artillery man, to uphold the Gunner's motto 'Sarvatra Izzat-o-Iqbal', Captain Sunil Khokhar laid down his life in the best traditions of the Indian Army, for which he was awarded the Vir Chakra, posthumously."

Vir Chakra is awarded for the gallantry of a high order in the face of the enemy on land, at sea or in the air. The decoration may also be awarded posthumously The award of the decoration carries with it the right to use Vr C. as a post-nominal abbreviation. Among 1,322 Vir Chakra awardees throughout India to date, 139 have been nurtured by the sacred Haryanvi soil