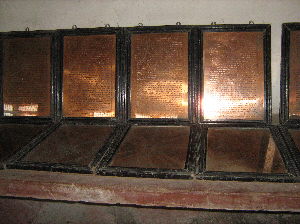 Satyarth Prakash (सत्यार्थ प्रकाश), – The Light of Truth is a book written originally in Hindi by Maharishi Dayanand, the renowned religious and social reformer and the founder of Arya Samaj. It is considered one of his major scholarly works. The book was subsequently revised by Swami Dayanand in 1882 and has now been translated into more than 20 languages including, Sanskrit and several foreign languages like English, French, German, Swahili, Arabic and Chinese. The major portion of the book is dedicated to laying down the reformist advocacy of Swami Dayanand with the last three chapters making a case for comparative study of different religious faiths.

The book contains fourteen chapters, the contents of which are detailed below[1]:

Ram Sarup Joon[2] writes that .... Swami Dayanand Saraswati has, in his book Satyarth Prakash, quoted from the famous book Chadrika Pushtika that from Yudhishtra to Harsh Vardhan, 124 rulers ruled for 4257 years 9 months and 14 Days. Six dynasties ruled during this period. The first three dynasties had their capitals in Hastinapur, Indraprastha and Kausambi. During the reign of the fourth generation, the capital was changed to Magadh. It is also mentioned that during the reign of the fourth

History of the Jats, End of Page-44

generation of Yudhisthra, Hastinapur was destroyed due to changes in the course of the River Ganga. The Dhillon Dynasty founded Delhi and ruled there from 800 BC to 283 BC.

The names of various rulers of first three dynasties and the duration of their rule from about 3000 BC is reproduced below:

Akchhemak was assassinated by Pradhan Bisrwae who became the ruler. In this line 14 rulers ruled for 600 years three months and 17 days.

Vir Maha, the prime minister assassinated Virsal Sain and seized the throne. His dynasty known as the famous [Dhillon|Dhillon dynasty]], ruled, for 445 years 5 months and 3 days.

16 rulers ruled in this period.

Aditya Ketu was killed by Dharan Dhar who then became the ruler and shifted his capital to Magadh. It may be noticed as a matter of interest from the above account that after Mahabharat, life span gradually and continuously declined, the average ruling period being 60 years for the first dynasty, 30 years for the second and 27 years for the third. No details are available of the history of the Jats upto 800 B.C.

However, from the establishment of Dhillon rule in 800 BC to the rule of Harsh Vardhan, the historical events can be traced in chronological order and in fair detail. The Majmal-ut-Twarikh Waqiate Panj Hazar Sala, is a book in Persian, which was translated into Urdu in 1898 by Shri Banke Lal? This book describes the Dhillon Jat rule from 800 B.C. To 350 BC. Dhillon is a big Jat gotra and is not found in any other community. A major part of this gotra adopted the Sikh faith.