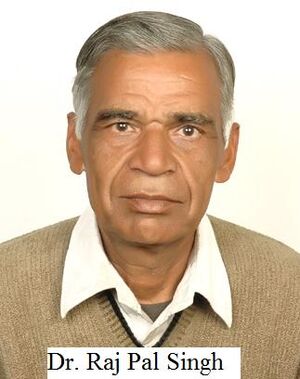 Dr Raj Pal Singh Janghu (b:14.12.1953-d:14.03.2019) (डॉ. राजपाल सिंह जांघू) is an author from Yamunanagar, Haryana. He has a flair for writing and evinces a keen interest in research and academic discussions on varied issues especially like the role of leaders connected with farming community, the Jats in the freedom movement and nation building and other contemporary issues. He is associated with teaching profession since 1975 and retired on 31.12.2013 as Associate Professor and Head, Department of History Mukand Lal National (P.G.) College Yamuna Nagar: 135001 (Haryana).

Dr. Singh was born on 14th December, 1953 in a family of moderate means belonging to Janghu clan of Jats of village Bilawal, Tehsil, Dadri, District Bhiwani. His father was Chaudhary Darya Singh and his mother is Smt. Chandrawati. He received his early education at his village school followed by studying at Govt. Middle School, Atela Khurd and ultimately passing his Matriculation from Govt. High School Birhi Kalan. He obtained his B.A. degree from GVMGRR College, Charkhi Dadri (affiliated to Punjab University) in 1973; and obtained Degree of Master of Arts in History in 1975 from the University of Rajasthan, Jaipur. Subsequently, he obtained Master of Arts in English from Kurukshetra University and PGDMB from PTU, Jalandhar. Meerut University, Meerut awarded him the Degree of Doctor of Philosophy in History in 1986.

Dr. Raj Pal Singh has visited various parts of India as well as a few places abroad like Dubai, Amsterdam and Suriname.

He is actively associated with a number of educational and social institutions. He has been

He is actively associated with voluntary blood donation movement and has himself donated blood for 41 times. He is active also in save environment activities.

Dr. Singh mainly concentrates on exploring and reconstructing History of farming community in general and the Jats in particular as his research activities and Publications that follow herein under indicates:

Topic of his Ph. D. Thesis was: “A CRITICAL APPRAISAL OF THE ROLE OF THE JATS IN THE POLITICS OF INDIA UNDER BHARATPUR STATE (A.D. 1722-1768) and he is currently working on ‘Socio-Economic and Cultural Changes in Haryana since 1966’ under the UGC Post Doctoral Minor Research Project Scheme. He has also supervised a number of students of Master of Philosophy in History who have completed their dissertations on the topics related with the reconstruction of the History of the Jats and have obtained their degrees successfully from various universities.

Dr. Raj Pal Singh regularly keeps in touch with the latest trends in history and historiography. He has attended over hundred seminars and conferences including participating as a delegate from India in ‘VIIth Vishawa Hindi Samelan’ held in Suriname (South America) in 2003.

The list of his publications is fairly long which includes books, articles and research papers as reproduced herein:

3. Devi Lal: The Man of the Masses, 1988, Veenu Printers and Publishers, Yamuna Nagar.

8. The Sikhs: Their Journey of Five Hundred Years, 2003, Bhavana Books and Prints, Delhi.

9. Studies in History of the Jats, Volume I: Ballabhgarh, 2008, Harman Publishing House, Delhi.

• ‘Banda Bahadur: His Role and Place in History’ the Punjab Past and Present, Vol. XXIX part I & II, April/October 1995, Punjabi University, Patiala

• ‘Jahandar Shah and The Sikh Uprising’ paper published in the proceedings of Punjab History Conference held at Punjabi University, Patiala, 2007.

• ‘First War of Indian Independence in Western Haryana and Role of the Ruler of Bikaner’ paper published in Sodhak, January-April 2008 issue, Jaipur.

• ‘Contribution of Swami Keshwanand in Freedom Movement and Nation Building’, in “The Jats, Their Role and Contribution to the Socio Economic Life and Polity of North-West India, Volume 3, ed. Dr. Vir Singh (2007), Delhi, pp. 175-186.

• ‘Unsung Martyr Raja Nahar Singh of Ballabhgarh’ in People’s Role in 1857 Uprising –Delhi and Neighbouring Region, in (ed.) Dr. Vir Singh in “The Jats, Their Role and Contribution to the Socio Economic Life and Polity of North-West India, Volume 3, (2007), Delhi, pp.245-250.

Papers presented at Conferences and Seminars

• ‘The Peasant Movement at Chautala village: 1945-46’ paper presented in UGC sponsored National Seminar on Peasant in Indian History held on 24-25 March, 2000 at K.U.K.

• ‘Historical Trial of Raja Nahar Singh of Ballabhgarh’ paper presented in the National Seminar on History and Life of the Jat community- Trends and Prospects- organized by M.S.E. New Delhi, 27-29 January, 2001.

• ‘Banda Bahadur and His Last Clash against the Mughals’ paper presented at the Punjab History Conference held at Punjabi University, Patiala from 17-19 March, 2006.

• ‘Swami Dayanand Saraswati on Uplift of Down-trodden and Women,’ paper presented at the National Seminar on the Life and Contribution of Swami Dayanand organised on 25th September 2010 at DAV College, Pundri- District Kaithal--Haryana.

• ‘Coins of Tribal Republics as Source of History of Haryana,’ paper presented at the “National Seminar on Reconstruction of Socio-Economic Aspects from Literary and Archaeological Sources” organised on 16th-17th February, 2011 at JVMGRR College, Charkhi Dadri (Haryana).

Dr. Raj Pal Singh is married with Dr. Gayatri Singh. She is an M.A., Ph. D Hindi and M.Ed , and has recently retired from Education Department by taking VRS. They have one son and two daughters.