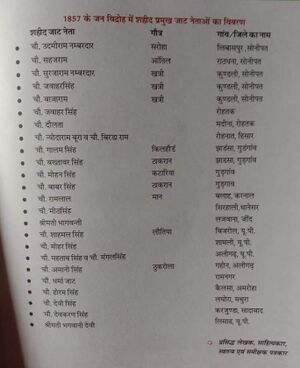 Populating a region which witnessed repeated invasions over a thousand years, and frequent change of rulers, the Jats developed into a fiercely independent people. Their relations with most of the rulers were strained at best. Even under the Mughal period, they maintained a certain degree of autonomy. Later with the floundering of the Mughal power, they became increasingly powerful, even though only a handful of states including Bharatpur were under Jat rule.

The First War of Independence of 1857

The response of the Jats to the happenings in 1857 was varied and two dominent factions were those of the Dahiyas of Sampla (allied to the Hoodas and Latmars) and the Maliks or Ghatwalas of Gohana tehsil. The Dahiyas and Bahniwals resisted the British in 1857, while the Haulanias Maliks were friendly towards them. The Dahiyas were an aggreived lot because their land had been constantly damaged by reh (saline efflorescence). The Maliks on the other hand had the benefit of canal irrigation.

The variety of response can be linked to several factors, including the extension of agriculture and the corrosponding tension between different clans to wield power and control territory, the segmentation of lineage and lack of an organised leadership.

The Jats of the Haryana Sarva Khap who rose up against British rule had considerable initial successes. However they were not supported by some petty rulers in Punjab and Rajasthan, who actively aided the British. The first war of independence failed, and the Jats were punished.

"At the commencement of our century the Jats of the Punjab, known, since their conversion to the precepts of Namuck, under the name of Sikhs, succeeded in founding a very powerful kingdom, under Runjeet Singh; and Napoleon, seeing their power increasing, conceived the idea of overthrowing, with the help of the Sikh Jats, the English dominion in India. For this purpose he sent French officers to them, such as Allard, Ventura, Avitabile, and others, who made the Sikh army the finest native force in India. This great Scythian race, which, under the various names of Yuti, Getes, Juts, Jats, or Sikhs, has shown so much power and vitality, still furnishes the very best native soldiers to the empire."[1]

Independence Movement in the 20th Century

The independence movement led by the Congress had a limited appeal in the northern rural regions. In general, attempts by the Congress to mobilize the Jat populace failed. This was because of a multitude of reasons, not in the least because the Congress was seen as representing essentially urban interests. The Jats' political association was with the Zamindar League and then the Unionist Party, which represented the peasant interests much better.

If the Jats were detached from the nationalist aspirations, they were also disinterested in the protection of the imperial system. The absence of any rethoric to uphold the imperial structures underlines the fact that the relationship with the colonial state was not fundamental to the Jat identity. In fact, there are clear signs their uneasy and sometimes hostile interactions.

Jats were recruited in large numbers in the army during the wars. This was seen as an important step for the growth of the community by leaders like Sir Chhotu Ram. Major recruitement drives were undertaken by him, but the underlying theme of his campaign was independence for India after the Second World War.

Many Jats joined the Indian National Army under the leadership of Subhash Chandra Bose and fought against the British.

The Jats, who formed the bulk of the British Indian Army, fought and died for freedom from Nazi tyranny in continents far from their homes and families. With the end of the war, they would accept no less than complete freedom in their homeland. This had its own effect in hastening the end of British Colonial rule.