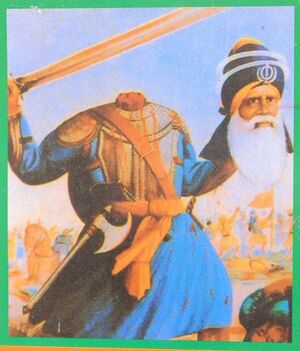 Baba Deep Singh (1682-1757) is revered as one of the most hallowed martyrs in Sikh history. 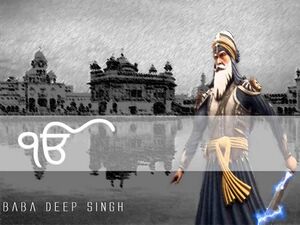 Baba Deep Singh was born into a Jat[1] Sikh family in 1682 in the district of Amritsar. His father's name was Bhagto Singh Sandhu[2] from the village of Pahuwind. The Sandhu clan was a prominent Sikh family in Pahuwind. He went to Anandpur in Vaisakhi 1700, where after baptising¹ into Sikhism, he started learning weaponry and riding. From Bhai Mani Singh, he began learning, reading and writing Gurmukhi and the interpretation of the Gurus' words. After spending two years at Anandpur, he returned to his village in 1702 and married and settled down. He went to Guru Gobind Singh at Talwandi Sabo in 1705, where he helped Bhai Mani Singh in making copies of the Guru Granth Sahib. After Guru Gobind Singh left for Delhi, he took up the service of looking after the Gurdwara Damdama Sahib.

In 1709, Baba Deep Singh joined Banda Bahadur during the assaults on the towns of Sadhaura and Sirhind. In 1733, Nawab Kapur Singh appointed him a leader of an armed squad(jatha). On the Vaisakhi of 1748, at the meeting of the Sarbat Khalsa in Amritsar, the 65 jathas of the Dal Khalsa were reorganized into twelve Misls. Baba Deep Singh was entrusted with the leadership of the Shaheedan Misl.

The demolition of the Harimandir

In April 1757, Ahmad Shah Durrani raided Northern India for the fourth time. While he was on his way back to Kabul from Delhi with precious booty and young men and women as captives, the Sikhs made a plan to rob him of the valuables and set the prisoners free. The squad of Baba Deep Singh was deployed near Kurukshetra. His squad freed a large number of prisoners and lightened the burden of valuables of Durrani considerably. On his arrival in Lahore, Durrani, who was in a black mood, ordered the demolition of the Harimandir Sahib. The shrine was blown up and the sacred pool filled with the entrails of slaughtered cows. Durrani assigned the Punjab to his son, Prince Timur Shah and left him a force of ten thousand men under General Jahan Khan.

Baba Deep Singh, who was entrusted with the care of the temple, felt that it was up to him to atone for the sin of having let the Afghans desecrate the shrine. He emerged from scholastic retirement (he had been making copies of the Guru Granth Sahib), and declared to a congregation at Damdama Sahib that he intended to rebuild the temple. Five hundred men came forward to go with him. Baba Deep Singh offered prayers before starting for Amritsar:"May my head fall at the Darbar Sahib." As he went from hamlet to hamlet, many villagers joined him. By the time Baba Deep Singh reached Tarn Taran Sahib, ten miles from Amritsar, he had over five thousand peasants armed with hatchets, swords, and spears, in his train.

At the news of the approach of the Sikhs, Jahan Khan ordered a general mobilisation of all able-bodied men in Lahore. Leading a force of twenty thousand, he proceeded towards Amritsar. The Sikhs and the Afghans clashed at the village of Gohalwar on November 11, 1757[3]. The Sikhs pushed the Afghans back and reached the village of Chabba where General Attal Khan came forward and inflicted a blow on Baba Deep Singh whilst Baba Deep Singh inflicted a blow on him. Khan was given a deadly blow while Baba Deep Singh was given a strike to the neck which completely severed his head from his body. A Sikh reminded Baba Deep Singh, "You had promised to put your head at the feet of the Guru in the Harimandir Sahib." On hearing this, Baba Deep Singh got up and held his head with his left hand and his double-edged sword with his right hand. Baba Deep Singh reached the Harimandir Sahib, where he bowed his head and breathed his last. In due course of time, the temple was rebuilt.

Back to Military Services/Back to The Martyrs