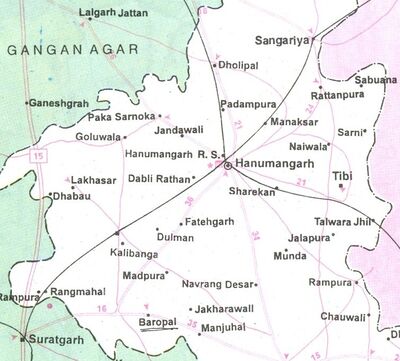 Location of Badopal in Hanumangarh district

It was a very fertile area but that prosperity was ruined due the Rajasthan Canal as it ( Rajasthanj Canal). The osmosis phenomenon lead to the salty elements come to the surafce and the land became infertile. The process is named as Same (सेम ).

Same (सेम) - Same may be defines as the phenomenon when the area around the Rivers, Canals gets affected due to excessive water. The area surrounding the River, Canal absorbs the water from the River, Canal deep down and results into the Sodium and other infertile elements to risen up at ground level. Presence of Sodium and other salts on the land makes it completely unfertile. This is known as Same.