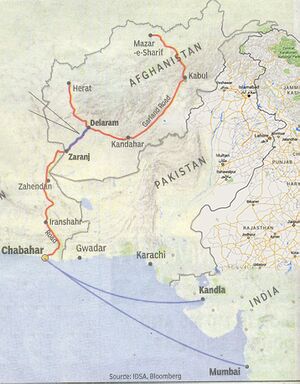 Delaram (Hindi:दिलाराम) is a city and a district in western Afghanistan. It is a major transportation center, with several major road converging on the area, including Highway 1, known as the Ring Road, Route 515 to Farah City, Route 522 to Gulistan and Route 606 to Iran.

The Delaram–Zaranj Highway, also known as Route 606, is a 217-km or 135-mile-long two-lane road built by India in Afghanistan, connecting Delaram in Farah Province with Zaranj in neighbouring Nimruz Province near the Iranian border. It connects the Afghan–Iranian border with the Kandahar–Herat Highway in Delaram, which provides connectivity to other major Afghan cities via A01, including to India's planned mining operation in Hajigak mining concession. Route 606 reduces travel time between Delaram and Zaranj from the earlier 12–14 hours to just 2 hours. India-Iran signed an agreement in May 2016 to connect it to Port of Chabahar with rail and road links.