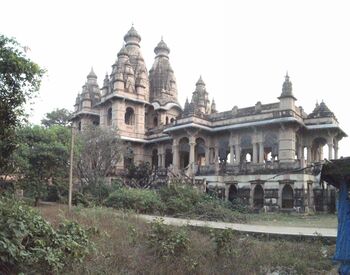 Deoghar (देवघर) is a city and district in Jharkhand. It is known for Baidyanath Dham, one of the twelve Jyotirlingas.

Deoghar is a famous health resort and a major Hindu pilgrimage center. Baidyanath Temple in Deoghar holds one of the twelve 'Shiva Jyothirlingams' and is also one of the 51 saktipeeths in India. The ‘Purans' refer to this temple as fit place for funeral obsequies. It is also famous for the mela of Shrawan (5th month according to the Hindu calendar system). It is the only place in India where the jyotirlinga and the saktipeeth are together. They lay side by side. Each year between July and August(On the eve of shravan month) about 7 to 8 million devotees come from various part of India to offer holy water from the Ganges at Sultangunj—almost 108 km from Deoghar—to present it to Shiva. Baidyanath Dham is one of the most secret destinations in Indian tourism. Many parts are untouched till recently. There are ruins of many Buddhist monasteries around.