Rai Khanda merged with Jats and his wife who vowed at Naina Devi that she will tonsure her child twice if the child survived. The child was subsequently names Do-Lat (double lock) that finally morphed into Dullat. [1] 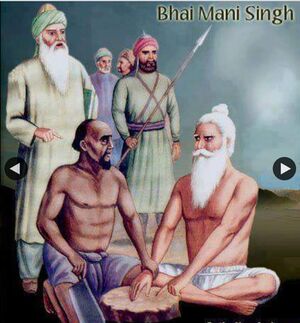 Bhai Mani Singh (d. 1737), scholar and martyr, came, according to some later chroniclers, following Giani Gian Singh, Panth Prakash, of a Dullat Jatt family of Kamboval village (now extinct), near Sunam (30Â°7`N, 75"48`E), in Sangrur district of the Punjab. Mani Singh is said to have been brought in the early years of his birth to the presence of Guru Tegh Bahadur at Anandpur. He was approximately of the same age as the Guru`s own son, Gobind Singh, Both grew up together Gobind Rai [Das] and Mani Ram were the names they went by in those pre Khalsa days. Mani Singh remained in his company even after he had ascended the religious seat as Guru.

Mani Singh accompanied the Guru to the seclusion of Paonta where Guru Gobind Singh spent some three years exclusively given to literary work. Mani Singh had also developed a taste in letters. He transcribed for distribution the holy volumes and shorter anthologies of hymns and sabdas. When on 30 March 1699 Guru Gobind Singh inaugurated the Khalsa, Bhai Mani Singh was among those who took the vows. Soon thereafter he was sent by the Guru to Amritsar to take charge of the Harimandar which had been without a custodian since the death in 1696 of Sodhi Harji. Mani Singh happened to be in Anandpur again when following the last of a series of battles against the Hindu hill rajas and the Mughal troops at Anandpur, the Guru evacuated the town on the night of 56 December 1705. He escorted Guru Gobind Singh`s wives, Mata Sundari and Mata Sahib Dcvari to Delhi. In 1706 he rejoined Guru Gobind Singh at Talvandi Sabo (Damdama Sahib) where he prepared under his guidance the final recension of Sikh Scripture, the Guru Granth Sahib.

Some time after the Guru`s departure for the South, Bhai Man! Singh resumed his duties at Amritsar. According to Ratan Singh Bhangu, Prachin Panth Prakash, he carried out his duties at Amritsar under the authority of Mata Sundari, who was at Delhi."Residing in the Akal Buriga," says Ratan Singh Bhangu, "he strengthened the sinews of Sikhs` religious faith and corrected such of them as had faltered or erred. He sowed the seed and planted gurmat among all irrespective of caste, through discourse and anecdote.

" He also went around the countryside preaching. For example, a letter, still preserved, written by him to Mata Sundari on 20 April 1711 shows him to be engaged in his religious and administrative duties at Amritsar; but three years later in 1714-15, he was, according to Gurbilas Chhevin Patshahi at Nanaksar in Bagarivala village in Jharig district giving discourses on the life of Guru Hargobind.As dissensions broke out in the Sikh Panth after the capture and martyrdom of Banda Singh Bahadur, Bhai Mani Singh used his influence to bring about peace between the warring groups the Bandal Sikhs and the Tat Khalsa. During the repression let loose on the Sikhs by the Mughal governors of the Punjab, Abd us Samad Khan and his son and successor, Zakariya Khan, the traditional festivals Divali and Baisakhi had hardly been held in peace.

In 1737, Bhai Mani Singh sought Zakariya Khan`s permission to hold the Divali festival at Amritsar. It was granted on the condition that a poll tax amounting to five thousand rupees (ten thousand according to Ratan Singh Bhangu) would be paid to government.This was simply a ruse, because, on the other liand, the governor sent a strong force under Diwan Lakhpat Rai to annihilate the Sikhs collected for the festival. Mani Singh got wind of the governor`s plan and forbade the Sikhs, scattered in different forests and desert regions, to assemble at Amritsar.

Consequently no tax could be collected and paid. Bhai Mani Singh was prosecuted for not paying the stipulated sum. After a summary trial he was asked either to embrace Islam or face death. He chose the latter and was executed with his body mangled bone by bone.

On the site of his martyrdom in Lahore stood, until the partition, Gurdwara Shahid Garij. Another memorial gurdwara has been raised in recent decades at the ruined site of Kamboval near Laungoval, believed to be his birthplace. Bhai Mani Singh`s achievement in the literary sphere is his compilation of the Dasam Granth, the Tenth Master`s Book, containing compositions generally believed to be Guru Gobind Singh`s. To his name are attributed two other works in prose: Gian Ratnavali, an account in traditional style of the life of Guru Nanak, and Bhagat Ratnavali better known as Sikhan di Bhagat Mala, which is an illustrative commentary, in anecdotal style, on Bhai Gurdas` Var XI. The author of Gurbilas Chhevin Patshahi also claims that his work is based upon discourses given by Bhai Mani Singh. .

Dullat population is 3,900 in Patiala district.[3]