Location of Sonkatch tahsil in Dewas 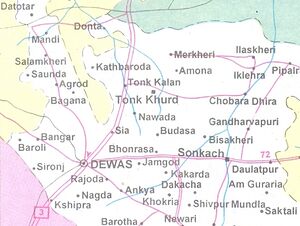 Gandharvpuri (गंधर्वपुरी) is a village in Sonkatch tahsil in Dewas district in Madhya Pradesh. PIN: 455119

Gandharvapuri means the City of Gandharvas

It is situated about 15 km north of Sonkatch. 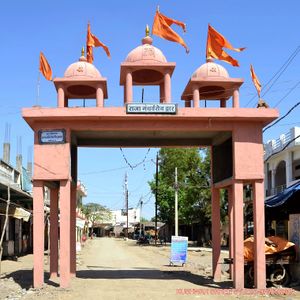 It is the city of Raja Gandharvasena (गंधर्वसेन), father of Vikramaditya, King of Ujjain.

Vikramaditya (विक्रमादित्य) was a legendary 1st century BCE Emperor of Ujjain, India, famed for his wisdom, valour and magnanimity. According to the Pratisarga Parvan of Bhavisya Purana, he was the second son of Ujjain's King Gandharvasena of Paramara dynasty.

Vikram era started in 57 BC by Vikramaditya as a commemoration of his victory upon the Shakas.

Bhartari or Bhartrhari (भर्तृहरि) was the elder son of King Gandharva-Sena, and received the kingdom of Ujjain from The celestial god Indra and the King of Dhara.[2][3] Much of the details about the lives of Bharthari and his brother Vikramaditya are from the tales of Baital Pachisi (Twenty five tales of Baital), translated as 'Vikram and The Vampire' by Sir Richard Francis Burton in 1870.

When Bhartrhari was king of 'Ujjayani' (modern day Ujjain) in his state there lived a Brahman who after years of austerities was given the fruit of immortality from the celestial tree of Kalpavriksha. The Brahman presented the same to his monarch, Raja Bhartrhari, who in turn, passed it on to his love, the beautiful, Pinglah Rani or Ananga Sena (as per Maha Kavi Kalidas), Raja Bhartrhari's last and youngest wife. The queen, being in love with the Head police officer of the state, Mahipala, presented the fruit to him, who further passed it on to his beloved, Lakha, one of the maids of honour. Eventually, Lakha being in love with the king presented the fruit back to the king. Having completed the circle, the fruit revealed the downsides of infidelity to the king, he summoned the queen and ordered her beheading, and ate the fruit himself. After that he abdicated the throne, to his younger brother Vikramaditya, and became a religious mendicant.[4][5]

Bhim Singh Dahiya[6] that ....Gandharvasena father of Vikramaditya of Ujjain is mentioned in legends of Malwa.[7]

What is the meaning of calling Vikramaditya as a Huna and son of Gandharva Sena? It is to be noted that Samudragupta was very fond of, and an expert in, playing various musical instruments, as is clear from his coins. There is no wonder, therefore that he has been called Gandharva Sena, because this art is especially associated with the Gandharvas. And it is impossible to believe that an Indian writer shall call a national hero of their history's golden period as a Huna, unless it is the truth !

Banabhatta[8] mentions Sthanvishvara district and equates it with the singers' Gandharvas' city.

Rajatarangini[9] mentions that .....The passion of the king may appear to the senseless as nothing guilty, but for that passion Nara I (1023-983 BC) suffered what none over suffered. When a king, under the pretence of protecting his subjects, oppresses them, he generally meets such a death unawares. For it is known that the anger either of a chaste woman, or of a Brahmana or of a god can destroy the three worlds. Even to this day, the burnt houses and the tank near the hill Chakradhara remind the people of the occurrence. This king reigned over a period of thirty-nine years and nine months, and within this short time the town of Kinnarapura became as beautiful as Gandharvvapura.