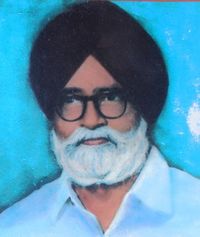 General Mohan Singh (1909–1989) was an Indian military officer and member of the Indian Independence Movement most famous for his role in organising and leading the First Indian National Army in South East Asia during World War II. Following Indian independence, Mohan Singh later served in public life as a Member of Parliament in the Rajya Sabha (Upper House) of the Indian Parliament.

He was born the only son of Tara Singh and Hukam Kaur, a peasant couple of Ugoke village, near Sialkot (now in Pakistan). His father died two months before his birth and his mother shifted to her parents home in Badiana in the same district, where Mohan Singh was born and brought up.

As he passed high school, he joined the 14th Punjab Regiment of the Indian Army in 1927. After the completion of his recruit training at Hrozpur, Mohan Singh was posted to the 2nd Battalion of the Regiment, then serving in the North-West Frontier Province. He was selected as a potential officer in 1931, and after six months' training in Kitchener College, Nowgong (Madhya Pradesh), and another two and a half years in the Indian Military Academy, Dehra Dun, he received his commission in 1934 and was posted for a year to a British unit, the 2nd Border Regiment, and then to 1st Battalion of his former 14th Punjab Regiment, which at that time happened to be at Jhelum. World War II broke out in 1939.

Mohan Singh had been promoted to captain when his battalion was earmarked for operational service in the Far East. The battalion was still carrying out intensive training at Secunderabad when he married, in December 1940, Jasvant Kaur, sister of a brother officer. He left for Malaya with his unit on 4 March 1941.

Japan entered the War with her surprise attack on the American air base at Pearl Harbor, Hawaii, on 7 December 1941 and overran the entire South East Asia within a few weeks. The Japanese Imperial General Headquarters in October set up the Fujiwara Kikan, or the F-kikan, in Bangkok, Headed by the Major Fujiwara Iwaichi, chief of intelligence of the 15th army. Tasked with intelligence gathering and contacting the Indian independence movement, the overseas Chinese and the Malayan Sultan with the aim of encouraging friendship and cooperation with Japan,[1] Fujiwara's staff included five commissioned officers and two Hindi-speaking interpreters. His initial contact was with Giani Pritam Singh. Pritam Singh was a leader of such an organisation. He and Major Fujihara, a Japanese officer, requested Mohan Sing to form an Indian Army comprising the captured Indian soldiers. Mohan Singh hesitated but ultimately agreed. Fujihara handed over about 40,000 Indian soldiers, who had surrendered to him, to Mohan Singh. It was actually the first step towards the formation of the INA.

The British force in the northern part of the Malaya Peninsula including Captain Mohan Singh's battalion, 1/14 Punjab Regiment, was fleeing towards the south. Mohan Singh's own forces had been outgunned and destroyed by superior Japanese forces at Jitra. Captured by Japanese troops after several days in the jungle, Singh was taken to Alor Star to Fujiwara and Pritam Singh at a joint office of the F-Kikan and the IIL. Fujiwara, later self-described as "Lawrence of the Indian National Army" (after Lawrence of Arabia) is said to have been a man committed to the values which his office was supposed to convey to the expatriate nationalist leaders, and found acceptance among them.[2][3]

Although Pritam Singh was involved to a large extent, it was Fujiwara who, with his sincerity of purpose and belief,[4] convinced Mohan Singh to betray his oath to the Crown by uniting with the Japanese mission for the greater motive of Indian freedom.[5] This included the promise that he would be treated as an ally and a friend, and not a prisoner of war. Initially helping Fujiwara to take control of the situation of looting and arson that had developed in Alor Star, Singh was in December 1941, after meeting with the Japanese commanding general, convinced of the feasibility of raising an armed Indian unit. Between himself, Pritam Singh and Fujiwara, Mohan Singh set about contacting Indians in the British Indian Army in South-east Asia, and also began recruiting from amongst those captured by the Japanese in Malaya. All Indian prisoners of war and stragglers were placed under his charge and he was asked to restore order in the town of Alor Star. Thus the nucleus what came to be the Indian National Army was born.[6][7] Kuala Lumpur fell on 11 January 1942 with 3,500 Indian prisoners of war, and Singapore on 15 February with 85,000 British troops, of whom 45,000 were Indians. Mohan Singh asked for volunteers who would form the Azad Hind Fauj (Free India Army) to fight for liberating India from the British rule.

A large number of men came forward to join what came to be termed as the Azad Hind Fauj (National Army of independent India). The new set-up came into being on 1 September 1942 by which time the strength of volunteers had reached 40,000. Mohan Singh, now designated a general, was to command it. Already in a conference held at Bangkok during 15–23 June 1942, the Indian Independence League under the leadership of Rash Behari Bose, an Indian revolutionary who had escaped to Japan in June 1915 and who had been living there ever since, had been inaugurated. Through one of the 35 resolutions passed by the conference, Mohan Singh was appointed commander-in-chief of the "Army of Liberation for India," i.e. the Indian National Army.

Though General Mohan Singh had kept good relationship with the members of Fujiwara Kikan, he was soon disenchanted regarding the intentions of some orders from the headquarter of Japanese army, wanted to use Indian National Army only as a part of Japanese army and who were deliberately withholding recognition and public proclamation about its entity as an independent liberation army. Some supreme commanders of Japanese army also had frustration against him. On 29 December 1942, General Mohan Singh was removed from his command and taken into custody by the Japanese military police.

It was only after the arrival of another Indian leader of great political standing, Subhas Chandra Bose, from Germany to the Far-Eastern front in June 1943 that the Indian National Army was revived in the form of Azad Hind Fauj. However, Mohan Singh could not be reinstated to the revived army.

Upon Japan's defeat, Mohan Singh was taken into custody by the British and repatriated to India to face trials. However, due to public pressure, roused by the INA Red Fort trials, Mohan Singh was only cashiered from the Army. He subsequently served in the Indian Parliament as a member of the Rajya Sabha (Upper House).

Mohan Singh's dream of liberation was realized with India's Independence on 15 August 1947, but this was accompanied by the partition of the country into India and Pakistan. Mohan Singh had to leave his hearth and home in what then became Pakistan and came to India a homeless refugee. He was allotted some land in the village of Jugiana, near Ludhiana, where he settled permanently. He entered politics and joined the Indian National Congress. After a stint as a legislator in the Punjab, he was elected to Rajya Sabha, the upper house of Indian Parliament, for two terms. In and out of Parliament he strove for the recognition of the members of his Azad Hind Fauj as "freedom fighters" in the cause of the nation's liberation .

Back to The Freedom Fighters/Padma Shri